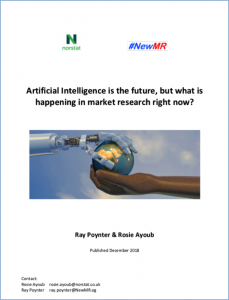 At the ASC Conference, 15 November 2018, London, we gave a presentation reviewing the sort of Artificial Intelligence being used in 2018 in the field of market research. This presentation was based on a survey, interviews with industry leaders, desk research and our own experience. We have now written a report based on the research we conducted and you can download it by clicking here.