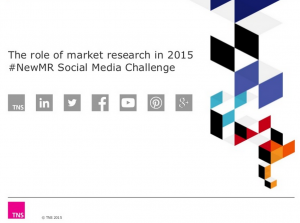 This is the third post that relates to the GreenBook/NewMR collaborative evaluation of social media research. This post relates to analysis conducted by TNS. At the bottom of this post is a link to the other posts in the series. Click here to access the full report from TNS.

A large proportion of the reports on social media focus on English language contributions, so one of the interesting features of the TNS report is that it looks at three languages (English, French and Italian) and identifies messages they have in common and messages that are different.

The report illustrates the processes required to clean data before it becomes information, and the difference between information and knowledge. For example, in the French data the initial query (based on terms like ‘sondage’) produced over 1.5 million instances. However, filtering those for relevance to market research reduced it to just under 10,000. The data also showed that there are about 25 times as many relevant social media posts in English as in French and Italian.

The role of Twitter in social media conversations about Twitter varied from about three-quarters of all market research relevant mentions in French to about one-fifth in Italian.

The report highlights several issues that should be of concern to market researchers, such as the way that the general public seem to talk about market research as “boring and associated with nuisance calls”.

The key finding from the TNS report is that in English, French, and Italian, market research needs to “build a more engaging online presence to attract the best and brightest new talent to the industry”.

Please read the full report, there is much more in it than is summarised here, in particular coverage of the French and Italian pictures and the way that big data and employment opportunities are being addressed. Read the report by clicking here.

The Social Media Collaboration Project
Read other elements of the project by clicking on the links below:

Once all of the reports are published Lenny Murphy and Ray Poynter will create an overarching review of the project, looking at the many ways social media can be used to enhance research.