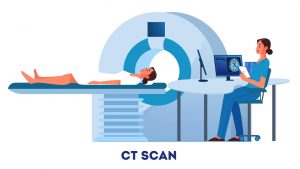 The first CT Scanner (Computed Tomography Scanner) was produced 40 years ago, by British electrical engineer Godfrey Hounsfield. CT Scanning rotates an X-ray source around the subject and the results are picked up on an array of detectors. A computer then collates the multiple images and creates a set of three-dimensional slices through the body, allowing doctors to see what is happening inside people.

From a collecting better data point of view, the interesting thing about the CT Scanner’s development was the change in direction that Hounsfield caused. In the 1960s through to the early 1970s the focus was on creating ever more accurate X-rays, with finer resolution. But X-rays reduce a three-dimensional subject to a two-dimensional picture, and whilst they are good are representing bones, they are not good for understanding soft tissue issues. Hounsfield’s scanner had a much lower resolution, but it produced a 360° view, enabling new things to be seen. Over time, the resolution and operation of CT Scanning improved, and in 1979, Hounsfield along with the South African physicist Allan Cormack were awarded the Nobel Prize in medicine for their work on the practice and theory of CT Scanning.

The lesson for market research?
The key lesson is to focus on usefulness not accuracy and to focus on getting a complete picture rather than an enhanced partial picture. Example of this process include:

Want to find out more about collecting better data?
NewMR is hosting a webinar on this topic on 14 October, with two presentations and Q&A sessions – click here to register