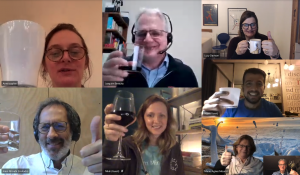 Adjusting to the new virtual paradigm, ESOMAR Council is meeting more frequently, but for a shorter amount of time, and with a more focused agenda. We have lost the inconvenience of travel, but we have added early starts and late finish times for some members of Council because of the time differences. This was the last meeting of 2020.

Financial Projection
It is clear there will be a negative financial outturn for the current year (finance “speak” for a loss, which is why it is important to have reserves), but the loss will be slightly less than anticipated, which was good to hear. The details will be in the final accounts. While this was a predictable outcome of the pandemic, the efforts of the team have managed to reduce the expected impact. A substantial part of ESOMAR’s revenue normally comes from our face-to-face events which have not been possible, so the hope is that 2021 will allow some of us to return to seeing each other at such occasions.

One interesting change in our processes is that ESOMAR is switching from Netsuite to Salesforce to help with the focus on members and also to leverage a good deal for our sort of organisation.

Membership has been holding up better than was feared. We have been reviewing people who have not been able to renew their membership and the main problem relates to people who can’t afford to pay – not to a loss in faith with ESOMAR. We are trying some innovative methods to boost membership, such as the end-of-year-special we are running at the moment. New initiatives are also being planned to help recruit and engage members.

2021 Plan
We discussed the 2021 Plan, which is mostly about how the management team will deliver against the ESOMAR objectives. Council recognised that 2021 is going to be a difficult year. The focus will be supporting members and continuing to leverage digital options. One upside of digital is that it means that ESOMAR can be more locally focused than is the case with face-to-face events.

Council Elections
The notification has gone out to members. The election committee comprises the last three Presidents. Joaquim Bretcha and Niels Schillewaert have accepted, and Laurent Flores will be invited to join them, if he is available. One decision that is being finalised is when will the new Council term run to? Will it end March 2023 or December 2022 – this will largely be determined by what fits best with the candidates, and the requirements for approving the annual accounts.

Key dates are:- Nominations close 22 January (so don’t delay if you are thinking of standing), the list of candidates will be announced 25 January. Canvassing will start on 1 February, and can continue until the end of voting. No ESOMAR resources or mailing lists can be used by or on behalf of candidates. Voting will take place from 1 March to 12 March, and the result will be made available week commencing 22 March.

AOB
The next two Council meetings will be 1st Feb next meeting and 3rd March. After the election of the new Council there will be a handover meeting, with both the old and new Council, in the week commencing 29 March.