Every week we seem to get a new report saying that Twitter, or Pinterest, or instant chat apps have knocked Facebook off its perch as the number one social media platform in the West, especially amongst younger people. One day this will be true, but not this year, nor next, nor (probably) the year after.

In partnership with Vision Critical’s Springboard omnibus I have re-run a study we first ran in August 2012, looking at social media usage, and focusing on regular social media usage. The data show two big messages:

Table 1 shows how many people said that they had used each of the listed forms of social media in the last year. The Vision Critical Springboard omnibus is broadly representative of Great Britain, but since it is an online survey, the figures for social media exclude the (approximately) 15% of Britons who do not use the internet. 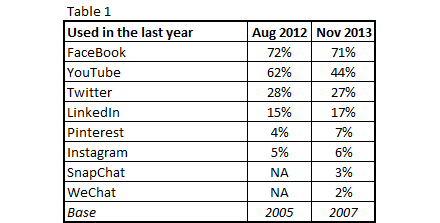 Table 1 shows that in terms of social media used in the last year, in the UK, there was very little change between 2012 and 2013, other than a drop in the claimed usage of YouTube. The gap between Facebook and the sites that are often reported to be its potential replacements, such as Twitter and Pinterest is massive, and in the case of Twitter not changing. The new messaging services, SnapChat and WeChat appear on the chart, but with very small figures. 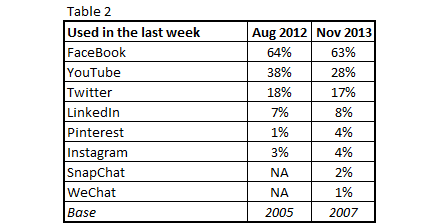 Table 2 focuses on recent usage, asking people to say what they have used in the last week. Again the two patterns are that Facebook is a long way ahead of the others and that there are few differences between August 2012 and November 2013.

The final myth that this study crushes is the myth that young people have deserted Facebook. Table 3 looks at Facebook claimed usage (over the last year and over the last week) by three age groups. The two patterns are:

Data from InternetWorldStats suggest that Facebook usage in countries like the US and UK is stable. Some people are leaving Facebook, and these are broadly matched by new people joining it. In many other countries Facebook is still growing rapidly, so globally it continues to increase its user base and current dominance.

What about the future?
At some point things are going to change, they always do. But, the change is unlikely to be very soon. My prediction is that in 12 months Facebook will still be the dominant social media platform in the UK, and in most countries outside of China. I doubt that the service that will eclipse Facebook is even in widespread use in most countries at the moment. Perhaps the change will come from China, the only major place where Facebook is not a force and where there are really strong alternatives.

This change requires further investigation to check, for example, the following:

The BBC today reported that the most searched for word via Google in the UK during 2013 was Facebook.