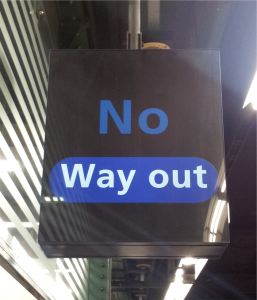 Why doesn’t the UK have more successful start-ups? That was the question posed on Radio 4 to Wendy Hall (Professor of Computer Science at the University of Southampton) on the BBC’s Life Scientific programme.

Her answer was that we don’t kill things quickly enough. She went on to talk about some of the start-ups that she has been involved with. She described how a start-up might receive millions in initial funding. However, if it fails to take off, the company is then often given more money, because people do not want to see or accept that their money has gone. Her argument is that this tends to delay the end and gets in the way of new ideas being tried. Since most ideas fail, she would like the UK to move to a fail fast style, a form of agile business. Not only does it tie up money, but it ties up the entrepreneurs and idea makers who spend their time trying to make a doomed idea work, rather than moving on to the next idea.

When I think back to my time as a trustee of the Nottinghamshire Pension Fund, where one of our duties was investing, I can recall making this sort of mistake several times. At the time we did not call it a mistake, we thought of it as ‘being brave’ or ‘thinking long-term’ and showing ‘commitment’. But, perhaps Wendy Hall is right? Additional funding, from the same funding source, to something that has not taken off is probably not only a waste of money, it is probably something that wastes the time and effort of people who should be trying something new.