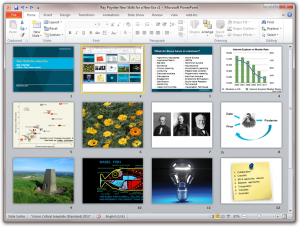 Example of PowerPoint used by Ray Poynter at IIeX in Atlanta, June 2014

Well, to be more precise, if you want to present well, learn to be a good presenter using PowerPoint and then start experimenting with other options.

In a standard PowerPoint configuration there are 9 default layouts. Of those 9, only 4 have bullet points as a standard option. When bullet points are a standard option, so are 6 other elements, such as a table or chart. So, out of 33 options in the standard set of layouts, just 4 of them include bullets – so why are so many slides using bullets? I think the answer is lack of imagination, lack of training, and lack of skill – but I don’t think it is because PowerPoint makes people do it.

The presenter needs to be clear about the message, they need to think about what they are going to say and how they are going to say it, and then support that with visual and animated aids that have been chosen (or created) to help them get their message across in the best way possible (usually engaging, informative, stimulating, and energising).

Have a look at Hans Rosling present at TED in the clip below. Yes, he makes great use of animated graphics – but then ask the question, would he still have been great if he had used simple slides? I think the answer is yes, the GapMinder material simply make great better. In fact, Rosling is using PowerPoint (or similar) for sections of his presentation.