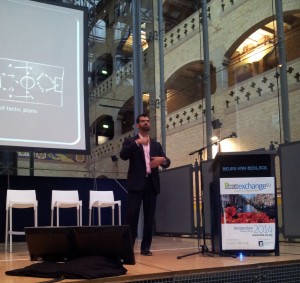 I’ve just spent two days at IIeX in Amsterdam, and had the pleasure of being a co-chair for the event. IIeX was a great success and I think the event has several lessons for other events (including my own NewMR events) and for the research industry; and here are my initial thoughts and observations. (BTW, the image is of Patricio Pagani form Infotools, and in the background you can see the wonderful architecture of the venue).

The main event was two days long, starting at 8:30 and finishing after 6pm (just one of the North American influences on the event). I am not sure how many presenters/speakers/sessions there were, but I know that the chair’s briefing pack included notes, photos, and bios for 123 people – a testament to the hard work of the behind the scenes admin team (you would be surprised how hard it is to get photos and bios from speakers!).

A large part of both days was delivered in two streams, which means that nobody saw everything. One of the key things about this sort of event is that you need to give yourself permission not to try and see everything. It is a bit like going to an all you can eat buffet, the aim is to try the things you want to try, not to try to consume as much as you possibly can!

Most of the sessions were 20 minutes long, with 15 minutes for the presentation and 5 mins for the Q&A. The great thing about this is that even if a presentation was not great, it was only a few minutes till the next one. The panel discussions tended to be 40 minutes, but even they were quick fire because they normally included 5 people. There were also shorter sessions, such as the people pitching to win the innovation awards.

During the breaks, and when choosing not to be in the main hall, people visited the exhibition. Generally the exhibition was good, but one element was great and I will come to that in a moment. During the first evening there was The Research Club, to help keep the exhaustion levels high.

The quantity, speed, and resultant exhaustion meant that the event tended to deliver a different experience to a more conventional event. Delegates were introduced to five ways of doing gamificaton, eight takes on mobile, seven approaches to neuroscience. This a) provides a better appreciation of the breadth of what is being offered (and a reminder that in most new areas there is little agreement and many competing claims and counter claims), and b) a taster for lots of possible providers, partners, suppliers, and the chance to make introductions and start conversations.

Some of the presentations were topic or subject based and were not salesy at all, a couple of people over-stepped the virtual line and were felt to be a bit too salesy (and suffered criticisms in Twitter for it). However, most of the presenters used their 15 minutes to say something like:

When this is done well it is actually quite useful. As a viewer you get a feeling for what solutions exist, what sort of problems can be addressed, what sorts of clients are using these approaches, what verticals seem to be getting the best results, and whether you want to have a conversation with the organisation.

My feeling is that this substantial North American element was one of the event’s key ingredients of success. 37% of global market research happens in North America (35% of global market research by spend happens within the USA). North America is a very large market with lots of exciting start-ups. We, in Europe, are keen to see what is happening there, partly to see what is new and partly to benchmark what is happening in Europe against it.

However, there was plenty of European content too, which gives local companies a chance to compare themselves against a North American benchmark.

Glass half full is probably an understatement

One key difference between IIeX and most events was the degree of optimism. A traditional market research conference has a balance of people extolling the new and people urging caution, demanding validation and side-by-side trials. At IIeX the mid-point was definitely somewhere where the mindset was:

But, strangely enough, I found this bias in favour of the new to be refreshing and less dangerous than I might have expected. At a conventional market research event there might be one paper on, say, neuroscience or gamificaton. The presenter makes their case persuasively and other than the occasional hard question in the Q&A, they get a fairly easy ride and manage put down a stake in terms of their approach to the category.

However, at IIeX, you might see six different approaches, each saying they have the best/true/optimal/or only solution. This might pique your interest in the area, but it will also show you real proof that this is not a mature or agreed field, and show you that very plausible people, quoting great academic sources, are suggesting very different methods, approaches, or options.

The best thing in the exhibition!

However, LBR, Lieberman Research Worldwide, set a new high for the exhibition with the use of a virtual reality exercise. LBR linked it to their presentation, talking about the way we see things impacts the way we perceive them. The virtual experience (which they also used at the US IIeX) consisted of standing on a platform, which rises into the air and which challenges the wearer to walk along a virtual plank, and eventually to step into the void. A few people could not do it at all, an even those who managed the task without a pause walked in an odd way.

Why was this a good idea?

The only thing I would suggest to LBR in the future is that they should consider branding the virtual experience. The room that people stand in, and perhaps even the plank, could have a branded message on them.

Not a replacement event

I don’t see IIeX as a replacement for the classic market research events such as ESOMAR Congress, or the MRS or AMSRS annual conference. The event is not (in its current form) going to supply papers that are going to be industry references, nor new thinking (it does supply new doing and new ideas), nor a the sort of neutral review that buyers and investors need.

However, it could (if it keeps growing) be a replacement event for some of the trade shows (for example the Insight Show and Research and Results) and some of the more tired third-party conferences which seem stuck in the 1990s.

I think the future is probably a mixture of:

This is going to get a lot bigger

The Amsterdam event had about 400 attendees and over 120 speakers. The next event is in Atlanta in June (see http://www.iiex-na.org/) and I think it is going to be much bigger than last year’s IIeX and much bigger than the Europe event. For anybody with a new message, who needs to be heard, and who wants to benchmark what they have against the best of the rest, this will be the place to be.

For anybody who wants to know what is new, who wants to meet the exciting new kids on the block, who wants to look outside traditional MR, this will be the place to go. I plan to be there and at the IIeX in APAC, later in the year.

If you want to speak at IIeX you need to move quickly, the call is open for a few more days.