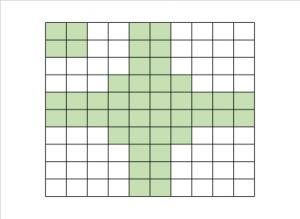 Key Point: When solving a problem, explicitly ask yourself whether you can solve it by removing something – because your bias is likely to favour adding something.

The phrase ‘less is more’ is a common expression in fields such as writing and design. Adding too many details, features, options etc can reduce the usability and/or attractiveness of a product, service or idea.

There is also a recognition that creating less can be harder than creating more, as in the quote attributed to Mark Twain “I apologize for such a long letter – I didn’t have time to write a short one.” Similarly, stakeholders frequently complain that when they ask for a management summary, they are presented with too many pages, containing too many numbers, and too much detail.

One example of the experiments that the article reports on was a grid like the one at the top of this page. When the participants clicked on a square it changed from white to coloured, or coloured to white. The task was to make the display symmetrical (vertically and horizontally) with the smallest number of clicks. The best solution is to click on the four coloured cells in the top left quadrant (turning them to white), making the pattern symmetrical in four clicks. But 51% of the control cell added 12 coloured cells (four in each of the blank quadrants). The test group were given three practice grids to work on before tackling the test grid, but even then, 37% of them added 12 coloured cells, rather than removing four of them.

The research looked at a range of experiments and reviewed the existing literature. It appears that people* tend to take the status quo as given and then seek to add something to get the results they want. In engineering this is often called an ‘end of pipe’ solution. For example, a power station might be emitting too much pollution, so the solution might seem to be fitting scrubbers to the chimneys to remove pollution, but a better solution might be to change the combustion process so that less pollution is created.

In her summary, Adams expresses the thought “Defaulting to searches for additive changes may be one reason that people struggle to mitigate overburdened schedules, institutional red tape and damaging effects on the planet”.

Explicitly look for subtraction
Given that it seems we have a bias against subtraction and in favour of addition, my advice is to make the search for subtraction solutions an explicit step**. If you use a checklist approach to solving problem (including things like the five whys) – make sure you include a step that says ‘Can we remove something to achieve our solution?’

*The report acknowledges that most of the experiments were conducted in the USA, so the finding might or might not be generalisable to the rest of the planet. The authors have repeated some of the tests in Germany and Japan and found similar results, but they would like further research before saying whether this phenomenon is cultural or global.

** Yes, I note the irony of adding a new item to my problem-solving checklist to ensure that I explicitly look for subtraction opportunities 

P.S The term less is more dates back to at least the 19th Century, where the poet Robert Browning used it in the poem Andrea del Sarto

“Yet do much less, so much less, Someone says,
(I know his name, no matter)—so much less!
Well, less is more, Lucrezia: I am judged.”