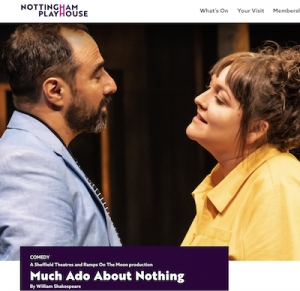 Last week I saw an amazing production of Shakespeare’s Much Ado About Nothing at my local theatre (the Nottingham Playhouse). As well as being a great evening’s entertainment, it was also an object lesson in how to positively embrace DEI – diversity, equity and inclusion. I think this production contained useful pointers for my industry – the insights profession.

The performance
The show was a touring production and was a joint initiative by the Sheffield Theatre and Ramps On The Moon. The cast comprised deaf, hard of hearing, and hearing actors, along with actors who had other challenges.

The production did not simply take a regular approach to Much Ado About Nothing and have the actors mask their attributes to fit the standard model. The approach was to re-interpret the roles to match the actors. The female lead role of Hero was played by Claire Wetherall, who is deaf – so Hero was deaf. Borachio (the guy who deceives Claudio and Don Pedro) was played by Ben Wilson, who is blind, so Borachio was blind. After all, there is nothing in Shakespeare’s text that says whether Hero is hearing or not, or whether Borachio was sighted or not.

The production was in modern dress and there were a smattering of additions. For example, there were some modern English comments slipped into the text to make it flow better and to boost the humor for a modern audience. For example, when somebody spoke to Hero at one stage, they we told in an exasperated aside to ‘sign’. Later when somebody was signing to Borachio they were told in an exasperated voice, ‘don’t sign, he’s blind’.

I am not that familiar with the language that Shakespeare wrote in, so I found it really helpful to see the words on the digital screen, and to be reminded of the names of the characters.

The total effect was to produce a great production in its own right, which utilized the actors features and abilities to tell Shakespeare’s story. It was not a lesser version of a different production, it was a good version of its own production.

The Lessons for the Insights Industry
For many people, the key reason for embracing DEI is one of fairness. However, focusing too much on this element can result in people thinking in terms of sympathy and charity, rather than thinking about the benefits that diversity can bring. I think there are four areas where we can do a better job: 1) the people we research, 2) the people we employ, 3) the way we communicate, and 4) the way we meet.

The people we research
The first question is whether we are reaching a sufficiently diverse audience. For example, are we reaching people with visual impairment or with cognitive challenges? When we are talking about face-to-face research (e.g. some qualitative) are we ensuring that people with mobility challenges are in the audience?

When we do reach people, are we communicating in appropriate ways? If people use a survey, can people using screen readers access it? If we are using chatbots using voice, do we have an option that works for deaf people? If we are asking people to upload videos of themselves, are we making life hard for the less technically adept?

If we miss groups, for example, people with disabilities, people who are older, people who work shifts, then we are going to make the population look more homogenous than it is. We are likely to overstate the usability of many services, we might well be overstating the customer experience when we ignore people with different needs. In today’s hyper-competitive markets, where brands are trying to be as customer-centric as possible, missing out on groups of people who may have different needs or additional insights is a problem.

The people we employ
When we look at the insights industry, both client and supplier teams, it is clear that they are relatively homogenous and often quite different from the customers/citizens they are researching. Users of mobile phones, buyers of washing powder, users of public transport, buyers of alcohol, and viewers of TV programs are massively diverse, far more diverse than the teams researching them. The typical researcher is 20 to 60, university-educated, able-bodied, and in receipt of average or above average incomes for their age group.

The way we communicate
One of the most common criticisms of the outputs from insight professionals is that they are too boring and do not engage stakeholders. If our people were more diverse, we would be in a better position to create stories that unlocked the insights from the customers. One of the most powerful ways of communicating numbers is to highlight them in terms of a single case. If we explain that as a visually impaired person, we have personally experienced this when we used the product or visited their restaurant, or rode on their trains. And this is not just about visually impaired person, similar situations can be made more real by somebody who uses a wheelchair, who is deaf, who trans, who is a member of less privileged group, or who is not a graduate.

The way we meet
At conferences, in-person debriefs and on zoom our meetings tend to assume that everybody is hearing, everybody can see (including the ability to see colours). Zoom meetings have enabled a much wider range of people to attend, getting round the problems that wheelchair users and those with visual impairments have with face-to-face meetings. The first step is to make meetings more accessible.

However, if remember the VARK model we will acknowledge that there are four modes of learning (Visual, Aural, Read/Write and Kinaesthetic) and that different people have different strengths and preferences. Can we leverage these modes more fully as part of making meetings more accessible? For example, can we use real-time speech-to-text displays to aid comprehension? When we have visual information, can we support it with text and tables, not only for those with visual impairments, but also for people like me who tend to be more comfortable with tables?

Final Thought?
As well as being a great evening out, the play highlighted for me that DEI initiatives should not be just about making what we do today more accessible to other people, it should also be about trying to make what we do today better, and better means different.