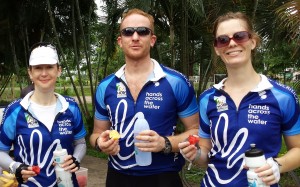 I have just spent an amazing afternoon in a Thai orphanage and later had dinner with the staff and children from Home Hug at Yasothon. Please read the whole of the following quote.

“In the late 1980s as the AIDS epidemic swept through at-risk Thai communities, Mae Thiew witnessed the impact on the children. There were those who were left orphaned as their parents died and children who were born with HIV and were abandoned. Mae Thiew quickly moved to provide a home for the children to meet their medical needs and to provide an environment free from discrimination. Support for Mae Thiew has fluctuated over the years and at times she was left without the resources to meet the children’s most basic needs. She often witnessed children dying on a weekly basis. On one day alone she buried three children who had succumbed to illness.
After learning about Home Hug in March 2010, the Hands Board agreed that it would be wrong to allow the children to continue to struggle. The Board had provided food and medicine to Home Hug ever since.
Not one child has died at Home Hug since Hands became involved in March 2010. Home Hug Yasothon is home to 65 kids. You can see a video of Mae Thiew talking about the home here.”

That quote is from the Hands Across the Water charity’s website. The charity, working with partners and Mae Theiw, has moved the home from a situation where children were dying regularly to where none are dying, and where they are flourishing, getting their medication, attending schools, and setting out on a life with a real future. The changes to Home Hug include installing kitchens and good sanitation, key factors in both happiness and health.

Riding 500KM in Thailand
The reason I was visiting the Home Hug at Yasothon was that I have just finished a 500KM sponsored ride in Thailand, organised by a great organisation called Hands Across the Water (and facilitated by Tour de Asia). I was on the ride with four colleagues from Vision Critical (Christina, Dan, Maren, and Mike) and by the time the last few donors pay their pledges we will have raised about $30,000 for the charity between the five of us – note you can make a donation via this link. There were also 8 riders from OYOB in Melbourne, two ride guides, Peter Baines, and a support team – and it was a great experience meeting and riding with them.

When I signed-up to take part in the ride I was dreading going to the orphanage. Riding 100KM a day, cycling in the heat of Thailand, raising thousands of dollars, paying my own costs for the event, and getting to and from Thailand all seemed straightforward. But I expected the visit to the home to be challenging – my experiences as a councillor in the UK had certainly been challenging.

However, I was wrong, very wrong, the visit was a joy, it was uplifting, and it reaffirmed my belief in the ability of all of us to make a difference.

Home Hug
As we arrived at the home, 16 weary cyclists, in cycling gear that was none too clean, we were met by a cheering throng of really happy, really normal, really well looked after children. The building was great, the grounds were great, and the children were fantastic. Home Hug is not somewhere that is ‘making do’, it is not somewhere where unwanted children are being ‘contained’ (which is the case in some places in the world), it is somewhere where lives are being built.

You can read more about Home Hug at Yasothon, and about the other homes that Hands Across the Water supports, via this link.

What Next?
During the ride, Peter shared his vision for one of the new projects for Hands Across the Water. At the moment many of the children in their care are left their by mothers who are HIV positive and working in the sex trade. The children are born with HIV and the only way they are going to get the care they need at the moment is in a suitable home.

However, Peter wants to create options for the mothers to leave the sex trade, live with their children and learn a trade, to break the cycle of abuse, poverty, and disease. This means suitable accommodation, facilities, and support – which means money. 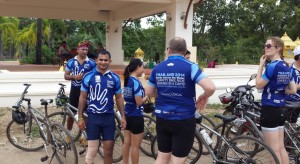 Here are some of the riders in our group taking a break as we made our way 500KM across Thailand. Over the trip the riders got to know each other, find out about Thailand, and learn plenty about themselves too. At the start we were riding, mostly, as individuals, by the end of five days were riding much like a team. 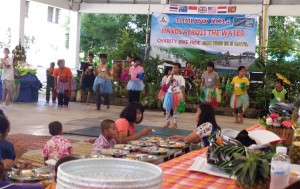 At Home Hug we were treated to a super meal and a show from the children. 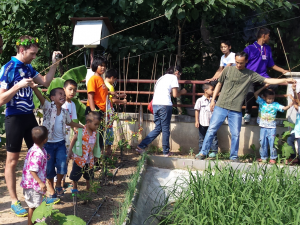 Fishing for catfish with the children in the grounds of Home Hug, Mike Carr is being given help and instructions.

The riders, children, and staff enjoying a dance after the dinner at the end of the ride – Christina still wearing the garland given to her by the children.

The VC Team the night before the ride, Maren Delap, Mike Carr, Christina Hoffman, me, and Daniel Alexander-Head.

I’d also like to thank all of those who sponsored us. At the moment it looks like the five VC riders will have raised about $30,000 – but we are still hoping to raise a little bit more – you can help via this link.