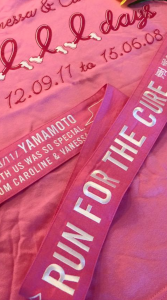 This is about Me (Vanessa) and Caroline… we have known each other since we were kids. Both growing up in the small town of Matamata in New Zealand (now famous as it is Shire in lord of the rings – yes we are from Hobbiton …and No we do not have hairy feet …or at least yet!) Like with most small town high school friends – we ended up in different universities and different towns (in our case different countries – Caroline in New Zealand and Vanessa in Japan). 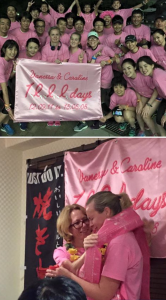 We hadn’t really kept in touch. And then came along Facebook smile emoticon… and this is when we got reconnected. On September 11th of 2012, Vanessa posted on her Facebook page a simple message “felt great to get out there a run – it really livens you up” … a fairly simple “daily FB comment”. That Evening a message was waiting in Vanessa’s messenger box … It was from Caroline.

Caroline had been diagnosed with Breast cancer one month earlier and had just been through her mastectomy. She was getting ready to start Chemo in October. Her message was simple. “I saw your running message – at the moment I barely have enough strength to walk to the car in the hospital car park… but I’m going to try to make an effort”

And that was it – the few simple words that started so much.

And that is what we have been doing – Caroline Fighting cancer every day and Vanesa fighting the weather and schedules to run 5km outdoors every day.

Caroline had Chemo from October to April, Radiation from May to July, Reconstruction in January 2014 and January 2015. She has been on Tamoxifen since July 2013 and this will last for the next 5 years. 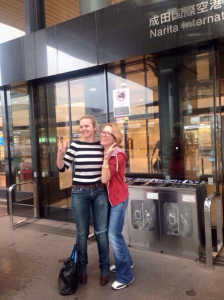 Vanessa started the “run for the cure” On September 11, 2012. In the space of 6 months and running every day she lost 11kg! She got fit enough to run the Tokyo marathon and then New York and finally fast enough to qualify for Boston. She has run in the snow, in the ice, in typhoons. At 3am before getting on a plane. She has run with blisters, sore tendons, influenza and hangovers. For those of us who are researchers we will know the crazy schedules we keep with deadlines, late night focus groups and weekend work – those conference calls at crazy hours because you have people in three different continents. I have run with the ESOMAR team at Congress, I have run home from work, showered and then got on a conference call. I have even done a conference call while running. The rules of the run is 5km and outdoors. (Treadmills are easy and Cancer is not … there will be good days and bad days …just like running outdoors)

All the while we fight – and raise awareness. Vanessa has found many running partners through the years.

One thought on “Running, Everyday, for 1000 Days! For life, and against cancer”