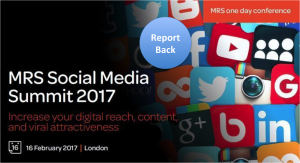 Last week I attended the MRS Social Media Summit in London, and was struck by something that at first seems to be a contradiction – not much change over the last seven years, but lots of progress.

Social media hasn’t changed, it has simply got better.

Key Themes from the Summit
The one day MRS Summit, well curated and chaired by Marc Brenner, provided several interesting themes and lessons for research providers and users alike, including:

Blended Research
The main theme of the day was the benefit of blending social media research with other techniques, including qual, quant, and big data. Clients such as Chloe Harper from TfL (London transport) and Peter Evans from RBS (Royal Bank of Scotland) – showed how they were fitting social into a much wider picture of insight tools and approaches.

Social Media is More than just Twitter
One striking observation was how many of the presentations depended largely or entirely on Twitter. The key reason is pretty straightforward, the data is relatively comprehensive and available at the individual post and user level – unlike Facebook where data is typically available only at an aggregated level. As an example of the richness of Twitter, Nathaniel Greywoode from Twitter pointed out that a Tweet may be only 140 characters, but each one delivers more than 65 data points. Presentations showed real value from utilising Twitter, including a new take on mystery shopping by Tim Barber of BDRC Continental, and communication testing by Lizzy Moroney from Firefish. However, as Statista point out, Twitter has an active user base in the UK of about 14 million, just under a quarter the population.

Plenty of people are using more than Twitter, with examples from Francesco D’Orazio from Pulsar, Gaelle Betrand from Kantar, and Kitty Janz-Moore from MediaCom – but the impression overall was that Twitter is the source of choice for many projects, perhaps too many.

WOM is More than Social Media
Steve Thomson from Engagement Labs made the point that Word of Mouth (WOM) is an important element in how markets operate, but that most WOM is not visible social media. Dark social (such as WhatsApp) and old fashioned face-to-face is much bigger than social. Steve showed a blended approach of social media listening with conventional research for other WOM (e.g. diaries and surveys) to get a better total picture for WOM (one of several presenters who highlighted blended approaches). Of course, an approach that blends social media listening and conventional research is not likely to be as quick or cheap as just using social – but Steve made a good case that the extra effort is necessary.

The Human Element is Still Essential
Although there was some impressive tech on display (automated coding from HSBC’s supplier, image recognition from Kantar Media, and ego network mapping/visualising software from IPG Mediabrands Marketing Sciences) there was also a great emphasis on the need for humans in the process. The creation of a research question from a business need, the choice about where to search and how to search, training the software, interpreting the outputs, and creating stories that lead to action are human strengths.

Seven years ago the industry was expecting to go fully auto soon. Five years ago some providers were offering fully-automated solutions. But, at this event in 2017 all the solutions were either fully human, largely human, or had a significant element of human input. A great example of the human element was presented by Kitty Jansz-Moore of MediaCom who reported on how they had used Cultural Analysis to help their client Skoda understand the British connection with cycling and Skoda’s investment in cycling activities. Kitty’s research depended on social, but it also depended on large amounts of skilled analysis by a cultural analyst.

The Key Lesson – focus on improvement, not disruption
Disruptions are rare (e.g. online data collection, research communities, mobile research, and social media). Disruptions are attention grabbing, but in the short-term effects are often exaggerated. What makes a difference to clients and the wider industry is not the disruption, it is the progress that people make with the changes that arise out of the disruption.