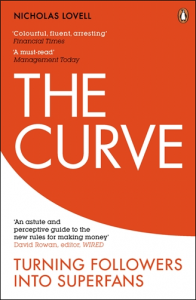 I have become a fan of The Curve. The Curve is a book by Nicholas Lovell, but it is also a business idea, a presentation, a website, and an opportunity to understand how to make money in a world where most things are free. Lovell has taken the ideas put forward in Chris Anderson’s book Free and shows how they can be leveraged as a business model. This book and its ideas are important for anybody involved in business planning, marketing and research.

In essence, Lovell makes the point that in many business categories (especially those that are digital) you need to master two elements:

To illustrate his point Lovell quotes a large number of examples in his book, one of which is the musician Trent Reznor and the way he launched Ghosts I-IV – a collection of four 9 track albums.

In the first week, the revenue from sales (from the small minority of people who were willing to pay) were $1.6 million. Of that, $750,000 came from the Ultra-Deluxe – which sold out in just 30 hours. Reznor had simultaneously expanded his total base of listeners by offering a substantial amount for free (and by acknowledging that pirates would distribute the whole work for free), but he also greatly increased his revenue by letting superfans pay more to get more.

Lovell has identified that the customer base for products, brands, services, stars etc is typically a power law curve. A relatively small number of people have a very high level of preference, and this tails away to a long tail of limited preference. This is very similar to the work of Andrew Ehrenberg and which underpins Byron Sharp’s book ‘How brands grow’.

The book is well written, sources are cited thoroughly and clearly, and Lovell builds the story well, moving from the initial idea to a wide range of examples, drawn from a wide range of industries and sectors.

You can buy the book via Amazon (and from lots of other sites too).

There is a short, free version of The Curve online.