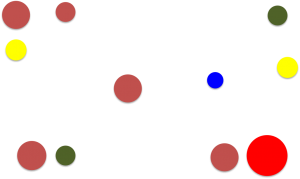 Long surveys, however, produce lower quality results than shorter surveys, as Ray points out. Respondents tire, and begin satisficing, providing less accurate answers as survey length increases. Respondents who stick with a long survey often differ in key ways from the target demographic; this bias is exaggerated even further when researchers throw out incomplete responses. Respondents are increasingly taking surveys on mobile devices, where long surveys get even longer as compound questions such as matrix or grid questions get rendered as a series of single rating questions across multiple screens. (According to my own research on research, paid panelists provide similar quality results on the same questionnaire taken at a desktop or on mobile. However, unpaid panelists, such as customers, do a much poorer job on the mobile version of such questionnaires.)

But what kind of survey might supplant the long survey?

In computer science, an array is a sequence of data accessible by an index: looking up U.S. population by year, for instance. Most arrays are comparatively short and typically each record contains an entry. Sparse arrays, on the other hand, are comparatively very long and most records are empty: a list of U.S. citizens by Social Security Number, for instance. (As a result, sparse arrays are implemented differently from conventional arrays.)

Similarly, a sparse survey is one where most questions are not directly asked to an individual respondent. To keep the survey short, from the respondent’s perspective, respondents are skipped over most of the questions through different techniques:

Another way to hide the true length of the survey is to hide questions and populate them from past surveys or from databases. Why ask demographics if you already have those on file? No respondent ever sees hidden questions, yet they are analyzed just like conventional survey questions. This is becoming increasingly popular. ResearchNow can append information about registered voters or household credit information. Lightspeed GMI has one panel where panelists have opted in to provide access to their credit card data, which is appended to each survey response. Lightspeed GMI also has a separate panel where people have provided their Facebook profile; you can append to your survey what brands from a competitive set that respondents have “liked” on Facebook. For one customer satisfaction survey, we appended 15 fields representing categories of purchases made using a retail loyalty card—integrating actual behavioral data into the survey. For our own survey of our customers, we append data about the attributes of the project we just completed on behalf of that customer.

As these examples show, long surveys are already evolving into sparse surveys. Of course, there are many barriers to adoption:

Sparse surveys do not make sense as a replacement for every long survey. But surveys with long lists of brands, products, or attributes are often a good fit for this technique. Expect to see more of them, even as respondents see less of such surveys.