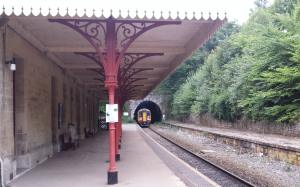 Most of the timetables in the station office were happy to be timetables. They prided themselves on being comprehensive, on being up-to-date, and easy to read. They worked hard to add symbols for things like buffet cars, cycle racks, and special notes.

But one timetable was different to the rest. This timetable wanted to be an itinerary. The timetable had looked at the way that travellers seemed to have a very casual and disinterested relationship with tables. But when they travelled with an itinerary they held it securely, they consulted it at every step in the journey, trusting it to guide them from A to B safely and efficiently.

The timetable re-invented itself; it picked an exciting destination with a fun-packed and informative route, expecting that the travelling public would be delighted. However, the table-turned-itinerary was left on the shelf. Not only was it not respected like the itineraries it had watched, it was not even used in the way the other timetables were being used. This left the table-turned-itinerary sad and disgruntled.

Luckily, one day a flaneur passed through the station, a women who sauntered around observing society. The flaneur took pity on the table-turned-itinerary and explained that to create a useful itinerary from a timetable it is necessary to know where the customer wants to go before producing an itinerary. An itinerary is a personal thing; the right itinerary for one traveller will not necessarily be the right itinerary for another traveller.

The table-turned-itinerary asked, is it just a matter of asking where, when and how the customer wants to travel and printing it out? Well, yes said the flaneur, it can be, but it can also be much more. How about finding out what really suits the traveller and making suggestions about destinations, routes and alternative. Now that sounds like fun said the table-turned-inspiration.

Luckily, he also chanced across the flaneur who explained that the story has to fit the problem, just like the itinerary has to fit the journey and the person. Data contains thousands or even millions of possible stories, but only a few of them are relevant to a specific situation. To be a storyteller our data analyst has to find out the nature of the problem, find the message in the data, and craft a story that matches the message to the problem.

The moral of the story?
If you want to acquire a timetable then usually all you have to do is describe the type of timetable (e.g. all trains within the UK) and the supplier should be able to deliver something pretty close to your needs, perhaps after asking for a few extra details like in what language, or whether you want it on paper or electronically.

But, if you want an itinerary, something with solid recommendations, then you need to say where you are starting from, where you want to end up, and the key constraints, such as when do you want to travel, are you prepared to change trains, first class or standard class. For a really great itinerary the person producing it needs to know what you want, what you expect, what would delight you, and alternatives that might be of interest to you.