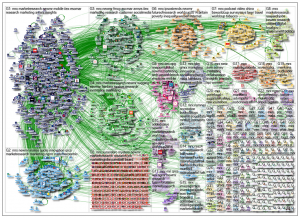 Back in July I asked ‘Who are the most influential market research people on Twitter?’ After some banter we narrowed the question to the #MRX tag and mid-July. I asked for nominations, Jeffrey Henning prepared a special version of his #MRX tweeted links report, and we have had input from ColourText, Texifter, and NodeXL.

You can read the full report by clicking here, and the full report includes several links back to much fuller and interactive information form some of the people who have made this report possible.

But here is a meta-analysis of the findings. To produce the list I tabulated who made the top ten of at least one of the lists, counted how often they made the top ten, and ranked them by that.

I’d like to give my thanks to NodeXL, Jeffrey Henning, Texifter, and ColourText for helping produce this report, and to @lennyism for his support in getting the idea off the ground and for helping share the results.

One thought on “Who are the top market research influencers on Twitter?”