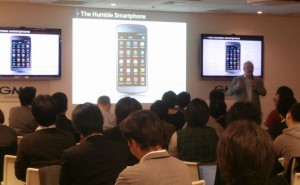 Are mobile campaigns and advertising underachieving? At first glance things look great, the spend on mobile advertising has ballooned up to $19 billion in 2013, according to the IAB. The problem is the comparison between ad spend and mobiles share of media, mobile campaigns and advertising are way behind the use of mobiles in general and use of mobiles for media consumption in particular. In the US and UK about one-third of media consumption is now thought to be via mobile, but mobile ad spend is about 3% of the total – implying advertising is underachieving by a factor of about 10.

Most new phones are smartphones, tablets sales are surpassing PC sales, the number of mobile devices is about 7 billion, which is the same as the number of people on the planet – this is the age of the mobile as far as the population is concerned. However, most mobile campaigns remain small and mostly uninspiring, often being little better than banners or pale imitations of online campaigns. There are exceptions, such as JackThreads (an app based campaign that used re-targeting and ads within other apps linked to their app activity) and Macy’s (using a word association mobile game to drive online and in-store sales), but they are the minority.

Mobile campaigns are underachieving and here are my thoughts on why, followed by what I think is needed to turn things around.

Five key problems for mobile are:

1. Most ‘Earned’ campaigns fail
The classic way to think about social and now mobile is in terms of the POEM framework – Paid (e.g. Facebook ads), Owned (e.g. a brand website or Twitter account), and Earned (shares, likes, retweets etc.) Media. Paid social and Paid mobile is broadly as effective as other paid options per dollar spent, which means large returns normally require large investments. Owned is variable in its effectiveness, but the better campaigns tend to require more resources (and the word resources is almost interchangeable with cost). Earned was initially seen as the big promise of social and mobile, a clever idea would go viral with very little investment. However, whilst examples of this are easy to find, each case represents a tiny minority. Each year there are tens of thousands of campaigns, and tens of them go viral.

The fact that most Earned campaigns fail does not reduce the usefulness of social and mobile. Done well social and mobile can deliver value as a Paid and to a lesser extend Owned medium, and at the same time hold out a chance for a campaign to go viral, in which case the campaign will deliver ahead of budget.

2. Apps are unlikely to be the solution to most mass campaigns
Figures vary, but most estimates say the average number of apps used on a smartphone ranges from 16 to 25. However, there are over one million apps available. The odds against your app making the big time are astronomical. App usage (measured in time) is growing, but the number of apps being used per person does not seem to be growing. Yes, you can (and should) get better at promoting your app, for example integrating with Facebook or Twitter and by engaging in ASO (App Store Optimization. Yeah, another three letter acronym!) You need to get better because other people are getting better too.

With Paid and Owned support, apps can be part of a successful campaign, but they are only very occasionally going to carry a campaign. In effect, relying on app success is like relying on Earned media. For most brands, and for most campaigns, giving customers/users the choice of app and mobile site is important – it normally does not make sense to favour one over the other.

3. Most campaigns should create long-term effects, but most mobile campaigns are focused on short-term effects
Whilst there are exceptions, most advertising and most campaigns should be seeking to build long-term advantages. In particular the campaign should improve a brand’s price elasticity so that either a) more people buy/use the product/service at a given price, or b) the same number buy/use it at a higher prices, or some combination of the two.

4. Mobile is too often used on its own, rather than in conjunction with other media
Numerous studies have shown that social and mobile are more effective when used in combination with other media, for example TV and Twitter being used together. The TV element drives the social/mobile, and the social/mobile drives the TV (cause and effect are rarely linear in the real world). If mobile is used in isolation it is usually relegated to tactical efforts to realise specific aims or is used in the hope (usually unrealised hope) that it will go viral.

5. Mobile is judged by inferior metrics
All too often mobile is assessed in terms of impressions, and clicks. To the uninitiated, the traceability of mobile in terms of impressions and clicks looks like a good thing. However, mobile is only going to be treated as an equal to traditional media when it is measured on the same metrics as they are, and when its ROI is assessed in terms of long-term impacts on the brand. Metrics such as impressions and clicks are great for campaign management, but not particularly relevant for assessing ROI.

How to improve things?
I think many of the answers for how to improve the status and results of mobile are being explored by #IPASOCIALWORKS, a consortium of the IPA, Marketing Society, MRS, Facebook, Twitter, and LinkedIn (see more here). In a report that is nearing conclusion the #IPASOCIALWORKS team will describe how to make social marketing campaigns more useful by moving from counting to measuring. The same remedies can and should be applied to mobile.

Am I saying there is no role for creativity?
NO! A good campaign will always do better than a poor campaign, if they have the same budget. Creativity, using channels in their optimal way, and creating engagement are all routes of stretching a budget a bit further. And, sometimes, the extra effort will be rewarded with a better than predicted response.

The point I am making is that in most cases, probably over 90% cases, you get broadly what you pay for, especially if you are a major brand.

But, to show I love a great story as much as anybody, here are some campaigns that went viral: