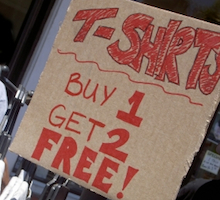 Something strange seems to have happened in the world of market research since the publication of Kahneman’s Thinking, Fast and Slow and Daniel Ariely’s Predictably Irrational. Market researchers have recognised that the issues raised by Behavioural Economics (often referred to as BE) are highly relevant to market research and raise questions about some of the ways we have been doing business. However, there seem to be a remarkable number of market researchers who seem to asserting that BE is mostly a qual thing, or that the main implications of BE for market research will be a focusing on qual. Whilst I am a fan of qual for all sorts of purposes, I am of the firm belief that BE is mostly a quant thing. BE is based on controlled experiments, the use of very good quant to highlight what people do and interestingly to contrast that with both classical theories (such as the rational consumer) and with what people say they do.

Dan Ariely’s Predictably Irrational is a good place to look at why BE is mostly quant, as it makes its broader cases by reporting a large number of experiments. For example, Ariely takes two samples of young men, and asks them the same questions about women, sex, and being responsible. The first sample were asked the questions under ‘normal’ circumstances (which we could describe as ‘lab’ conditions). This first sample provided answers typical of the responses normally gathered from this age group. The second group were provided with porn, asked to (in the privacy of their own rooms) excite themselves, and then take the survey. To nobody’s great surprise these young men were less considerate and more willing to say they would take part in risky behaviour, and were more likely to express outdated and sexist responses.

The study was a quantitative test, which applies to young men, in that culture, with those questions. It makes the point that things are contextual. In the world of market research this relates to how we might behave when circumstances change, for example travel behaviour when in a hurry, or drinking with a group of peers, or food shopping when hungry, or our willingness to go to the gym at the end of a busy day. With the current level of knowledge, few of these findings can be reliably generalised. We might hypothesise that if the young men with the porn had also been encouraged to drink alcohol then there responses might have varied even more from the ‘lab’ responses, but without conducting the test we can be sure and we can’t quantify the effect. The test does not tell us about other age groups, or females, or young men in different countries, cultures, or circumstances. Indeed, one of the things that BE highlights is that since context (including ideas such as framing and anchoring) are so important, it is even harder to generalise than MR had previously assumed, requiring specific experiments to measure specific contexts and effects.</P

There will be plenty of occasions when qual is useful, in the mix. For example, in another project, Ariely posed as a barman in bar selling a wide range of beers. Ariely created two cells by letting some tables/groups place their orders in the normal way and by asking people at other tables to write their orders down and pass him their slips. In the second cell this meant that the people ordering the drinks could not readily influence, or be influenced by, others. Ariely showed that in this bar, and for this cohort of students, people were much more likely to order the same drink if they ordered it ‘silently’, i.e. when they wrote it down. This perhaps suggests that in this group situation the students felt a need to vary their order from other people at the table. That is a quantitative experiment. However, if a researcher wanted to explore ways of changing people’s behaviour he/she could seek to explore the reasons for this behaviour could use qualitative research to explore people’s motivations and to generate possible strategies for changing behaviour. However, in order to establish whether the strategies did change behaviour, we would need to collect quantitative information – in this case till receipts could be used to measure the extent to which tables increased their rate of multiple purchases of the same drink.

The clamour for qual to be at the forefront of BE in MR seems to be based on two core propositions, both in my opinion bogus. Both of these themes stem from the widely agreed proposition that people are poor witnesses to their future actions and the reasons for their current actions. These propositions are:

So, what is your view? Do you think BE is creating a demand for more qual, or for better quant? Or, perhaps, BE calls for a different response altogether?

2 thoughts on “Behavioural Economics is mostly a quant thing”