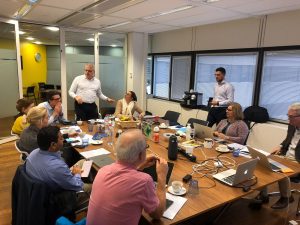 The first ESOMAR Council meeting of the year was held at the ESOMAR offices in Amsterdam, on February 27 & 28; here is my regular feedback.

Links to Other Organisations and Associations
The number of meetings, agreements, and partnerships with other organisations has been increasingly rapidly. For example, there is a now a nascent co-operation agreement with GreenBook, and lots of other discussions are happening. This activity is in accord with Joaquim Bretcha’s vision of building bridges between practices, people, countries and organisations.

Finance Report
Finances continue to be challenging; for several years ESOMAR has made either a small loss or a small profit. While this swing is small – which represents a level of stability – it does mean that ESOMAR has become more limited in being able to apply the resources to do the things we would like to do. For example, we would like to do more lobbying of lawmakers on behalf of the industry and members. At the meeting we were reminded that ESOMAR’s key focus this year (and probably next) is on Membership and Retention.

ESOMAR APAC Conference
The risks related to the Corona Virus and civil disruption in New Delhi were noted. At this time ESOMAR is monitoring the situation and taking advice but believes that the Conference will go ahead. There are already over 500 people registered. Beyond the APAC Conference, the events team are keeping a close eye what is happening. The team have noted that a number of companies have instigated a ‘no travel’ policy, even for people travelling from one safe place to another.

Working with Other Associations
There is a new “Associations’ Committee” to help bring all the strands taking place around the world into a single focus. It is clear that there is too much work to be done for any one organisation to do it all. For example, at present about 45 organisations have signed a partnership agreement with ESOMAR. At the core of ESOMAR partnership is the ICC Code of Conduct.

Membership
At this very early stage of the year, the membership signs are promising. One recent, key change is that Kantar has become a corporate member, a change that represents 500 plus additional members needing to be registered into the system.

Council received the results of the recent Membership survey. Once the results have been presented internally there will be a report back to the membership. However, to give you a sneak peek, the key points are 1) Satisfaction with ESOMAR is up compared with last year with 94% of members being Fully or Partly Satisfied (and 6% Not Satisfied). 2) The three main things that members want are the same as year (Knowledge, Networking, and Business Opportunities). 3) The main challenge for ESOMAR is the number of people who mentioned ‘unclear benefits’ – expect to hear more on this topic later this year.

The 2019 Membership survey adopted a new approach and comprised three short surveys. The response rate in 2018 was 12% and this increased to 24% with the new approach, a pleasing uplift which enabled us to dig further into the findings.

The Council recognises that the nature of membership is changing, not just in market research but in society in general. For example, what does membership mean in a world with Netflix? In the short term the key focus will be on meeting the current needs of members and explaining the benefits more clearly to potential members. However, there is an ongoing debate about the future of membership, what it should comprise and the future role or roles of ESOMAR.

GA/PS
One of the most important things ESOMAR does is to work with Governments to ensure that new legislation and new regulations do not make life unreasonable for researchers who behave ethically. (And conversely, we want the laws and regulations to make life difficult for people who do not behave ethically). Part of this process is achieved by creating codes of conduct, part is achieved by advising insights organisations, and the third pillar is achieved by lobbying legislators. The team reported back to Council about the Advocacy Toolbox ESOMAR have been working on, including meetings, position statements, coalition building, and speaking.

One of the growth areas in terms of interest is Artificial Intelligence. For example, what are the ethics, laws and regulations that are needed? Also, what codes do we want to see?

The Next Elections
Later this year we will be having elections for the President and for the new Council, who will serve two years. So, perhaps you should be thinking about what you can bring to the party? Is this the year you should stand? Needless to say, any of us on Council are always open and willing to chat about our experiences on Council, so if you’re interested, do not hesitate to contact any one of us!