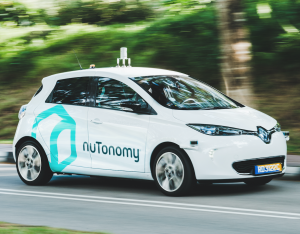 For me the concept of the driverless car exists in my mind as two contradictory elements. Firstly, it exists in my science fiction loving mind, as a key element, along with jetpacks, hover cars, and everybody being slim enough to wear lycra. Secondly, I am aware that there are test driverless cars on public roads all around the world, especially the Google ones in California – a current reality.

I am wondering if other people are similarly suffering from this double vision and whether it is obscuring their perception of how close we are to massive changes in society. In the same way that the gradual growth of digital assistants such as Siri has infiltrated our daily lives without any large-scale sense that we are living in a world we thought of as science fiction relatively recently, and one that is rapidly changing.

My thinking about driverless taxis and the curious lack of excitement about them was kicked into higher gear by the recent announcement that a driverless taxi service has been launched in Singapore by Nutonomy (read more here). OK, it is from only one destination and there will be a safety driver in the car – but it is happening, now, today! Uber is launching (or has just launched) driverless cabs in Pittsburgh (USA).

We call them driverless cars and driverless cabs or taxis, but that is marketing or comfort talk – these are robots. People are being driven around in robot taxis, and hardly anybody seems to find it surprising! In an interview with the Hindu Times, Nutonomy’s CEO Karl Iagnemma is very clear about the robot nature of the service, and why he chose Singapore (reasons include an aging workforce and shortages of taxi and bus drivers)

I was in Dubai last week running workshops and my taxi driver was saying he has been driving taxis in Dubai for seven years and would like to move to London. He asked whether I thought it would be easy to drive taxis in London. I explained I had no idea about the immigration and permit scene but that I did know it is hard to get a licence to be a taxi driver. However, I then asked him if he was aware that over the next few (5? 10?) years many (perhaps most) taxis would not need a driver? He was quite polite, but clearly thought I was affected by the local temperature, a warm 44C (111 F). He anticipates driving taxis in 5, 10, and 20 years’ time.

When driverless taxis are common, which could be really soon, certainly before a child 11 years old today finishes school, the job of being taxi driver will probably have disappeared. Most of the existing taxi companies will have disappeared. With an improved and cheaper service, more and more urban living people may opt not to have a car, and when they want a car they will hire one. When people hire a car (or rent a car in some versions of English) it will probably be a driverless car (a robot car). Right behind driverless taxis will be driverless buses (driverless trains are relatively common around the world already), and driverless lorries.

Within a few years we will be dealing with robots many times a day, we will be speaking to them to specify destinations and we will be entrusting our lives to them. This is going to change the way that all of us relate to robots. I suspect it will add substantial emphasis to the move to introduce robot receptionists, robot devices in the home, robot interviewers and much more.

Lenny Murphy and I have recently published a report on the impact of automation on market research, you can download a free copy by clicking here.