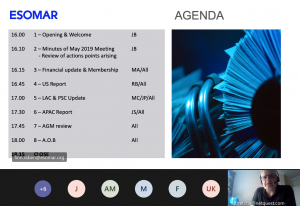 Under normal circumstances, this Council Meeting would be held on the Saturday before ESOMAR Congress (which would have been held in Toronto this year). This meeting would then have been followed by meetings with the National Representatives from around the world, followed in turn by meeting delegates and exhibitors attending the Congress. This is the meeting where we hear reports from APAC and North America and from the Legal Affairs Committee and the Professional Standards Committee. Today (as with the last few meetings) we met online, from locations as far east as Malaysia and India and as far West as Uruguay and the West Coast of the USA.

Marie-Agnès Mourot de Lathyle presented the finances, the formal part relates to 2019 – which is less on our minds than 2020, but is part of the process. One of the challenges is what will happen if the funding help from the Dutch Government is not available in the future. Note, we receive this subsidy because we have our HQ and staff in the Netherlands and we pay taxes there. The year continues to be a challenge financially, as will be outlined at the AGM.

To date, membership has held up well, despite some very difficult times for some members. The membership team has been working really well to help members and we continue to look at options to make it easier for new members to join.

Reg Baker reported back on our progress in North America. Although ESOMAR has many members in the USA, it is underrepresented in comparison with the large size of the US research industry. Reg reported on working with the local organisations in terms of complementary initiatives. Because of COVID we have switched from hosting and attending live events to online events and this has expanded the reach of ESOMAR considerably.

Mike Cooke presented the annual update. The LAC analyses new legislation and regulation and lobbies on behalf of the research and insights sector. The EU has recently reviewed the GDPR initiative, and while they may need more resource to prosecute it, they found there was no need in the near future to significantly change it. The EU is now looking at regulating the digital space, including regulating AI. The striking down of the Privacy Shield (which allowed European data to be transferred to the USA) means that the near future is very uncertain.

Judith Passingham reported on the PSC – which helps create, monitor and enforce standards. The number of complaints per year tends to be in the range 30 to 40 a year – many relating to non-payment. The number of complaints in 2020 looks likely to be lower. New guidelines are on the way for Primary Data Collection, Duty of Care, and the 28 Questions for Online Panels – this last one will probably include a few new questions!!

John Smurthwaite reported on the APAC region. It was great to see a large number of new members in India. Almost all of the countries in APAC are partners with ESOMAR and have signed the Code of Conduct. In China we have launched an ESOMAR WeChat group, the default method of communicating in China.

The Council reviewed the slides for the AGM (to be held next week) and suggested tweaks.

As the meeting ran over time, it was decided to hold an additional (virtual) Council Meeting to address issues and proposals around Diversity.

One thought on “Meeting of ESOMAR Council 10 September”