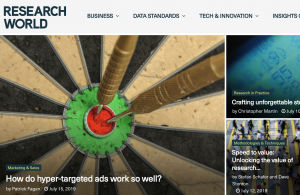 The ESOMAR Council meets four times a year in person to conduct its work, “It defines the objectives, vision and mission, approves strategy, administers the funding and performs all other functions attributed to it by the statutes.” The Council does not manage the executive functions of ESOMAR, these are handled by the professional staff, but Council does monitor and review the work of ESOMAR. Between these four meetings the Council members work via task groups and there are four teleconferences held between the regular face-to-face meetings, the most recent being 16 July.

The first item on the Agenda was the ESOMAR AGM, which is traditionally held as part of the Congress. This has the advantage of being a face-to-face forum where dialogue can happen, and decisions do change. The main disadvantage is that the majority of members can’t afford to attend the AGM. As a bridge to the future, ESOMAR will conduct a pre-AGM webinar about one week before the AGM, which will allow all members to see the reports and topics – allowing feedback on the points presented.

One topic that will be presented at this year’s AGM are proposed changes to the ESOMAR Statutes relating to the way the Council is elected and the composition of the Council. Another topic that will be discussed is ongoing work relating to membership fees. At last year’s AGM (and on other occasions) there has been a comment that ESOMAR’s membership in countries with developing economies is held back because the cost of membership is less affordable. Research has been conducted into whether a lower fee in some countries could provide a net increase in members and revenue. Council proposes to try a small-scale experiment to validate the findings.

The finance reports were presented, and it is clear that ESOMAR has a challenge in terms of revenue from the Directory and Research World, and the shortfall in revenue is being targeted as a major issue by the ESOMAR team. More money means more services and benefits for the members. If you visit the Directory or Research World you will see that both have been significantly upgraded and you might want to consider advertising or buying entries – and the new Research World is already receiving twice as much traffic.

Last year at the AGM ESOMAR voted for a small increase in the membership fees, because the cost of running ESOMAR increases in line with inflation. I made the point that at present inflation in the Netherlands (where most of ESOMAR’s fixed costs are) is running at close to 3%. My proposition is that ESOMAR should normally increase membership fees in line with inflation. Other members queried which inflation, since we are global. This topic will be reviewed further. Do you have a suggestion as to which inflation figure should be used? Would you rather see a small increase most years (pegged to inflation) or a larger but less frequent change?

The Reps Working Group
Lucy Davison reported back on the fantastic work that this group has done. There have been interviews with local volunteer ESOMAR Representatives from around the world and the team have a much clearer idea of the current state of play and of what is needed. Plans are being put in place to improve communications and coordination with the Reps, and many of these will be visible by the time of this year’s AGM, and especially at the Reps meeting at Congress.

The Plan for 2020
Joaquim introduced his vision for 2020. Given that ESOMAR Council has a two-year term of office, 2019 was a year that many initiatives started, so 2020 needs to be a year when those initiatives are delivered. The focus on 2020 will not be on finding new initiatives, but of completing work in areas like diversity and inclusiveness, making bridges to the data analytics community, working better with the Reps, improving ESOMAR’s footprint in North America, and delivering relevant services and propositions to all sections of the market research eco-system.