I was interviewed yesterday for an article that will appear in the new quarterly MRS magazine (now that the monthly magazine has gone entirely online). Although my bit of the article will be very small (if used at all) the interview did get me thinking about one key aspect of the interest in neuroscience. How much of our thinking, memories, and decisions happen within our own heads, and how much is determined elsewhere?
I am struck by three strands of thinking that suggest that a large part of what we think of as being inside our own heads might not be, context, social copying and/or discursive psychology.

Context
The collected works of the behavioural economists are suggesting that a very large part of what we say, feel, do is context driven. This in turn suggests that what is inside our heads during a survey, brain scan, facial coding session might be entirely irrelevant to what happens when we are in the situation. Which is why there is a growing amount of interest in observational research and in techniques that speak to people ‘in the moment’, for example some mobile research. 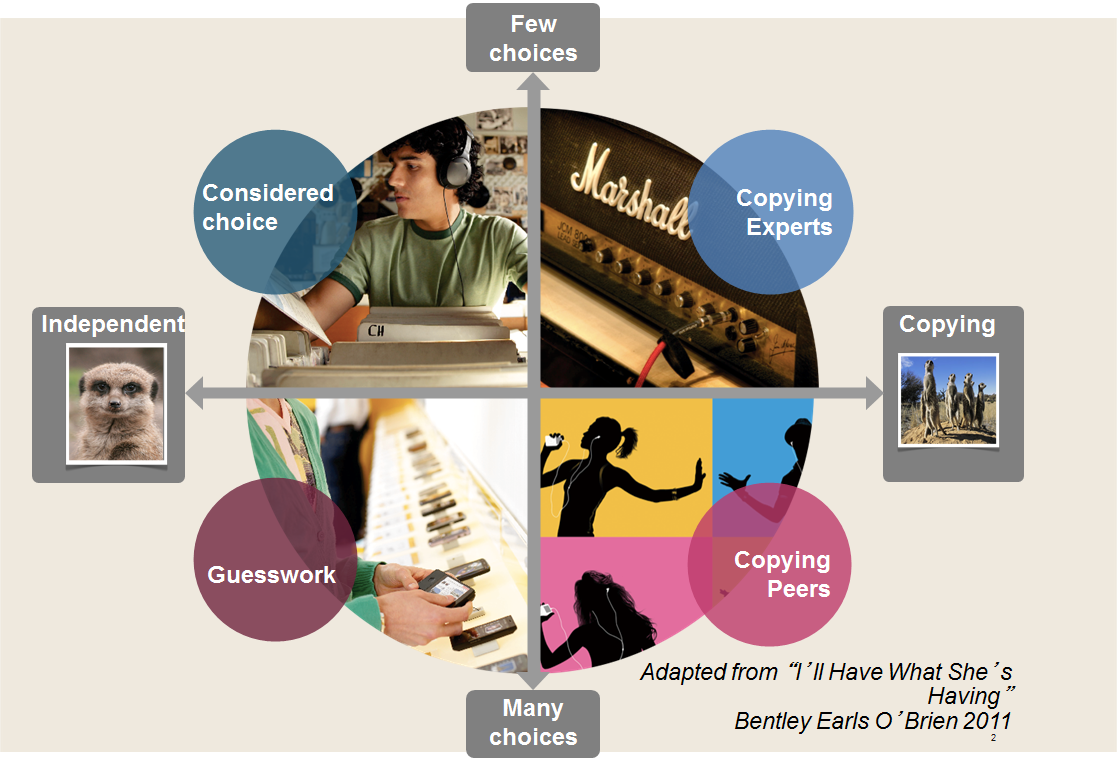 For, at least, the last five years Mark Earls has been highlighting that much of human behaviour can be accounted for by copying, first in his book “Herd” and in a more refined version in “I’ll have what she’s having”. At last year’s Festival of NewMR, Mark presented the map shown here and put forward the case that the role of the individual mind was limited to some situations and some choices. This raises the question, if somebody’s future behaviour is going to be determined by copying, what is the point of asking them about their plans and intentions. Equally, what is the point about examining somebody’s biometrics today (fMRI scans, facial coding, implicit association etc) if the answer to what they are going to do is dependent on events they are yet to experience.

Discursive Psychology
Discursive psychology is a branch of discourse analysis that suggests that a large portion of what we think of as ‘our attitudes’ or ‘our memories’ are actually created and conveyed socially, in terms of language. For example, consider how memories of a night out, or our school days, are created by pictures, discussions, and ‘stories’. Again, if a portion of ‘our’ memories and attitudes are constructed socially, the benefits of investigating the individual is limited.

The consequences for market research
The three threads in this blog, context, social copying, and discursive psychology all suggest that researchers need to determine, for each project, topic, and category, what is determined socially and what is determined by the individual. Having made that decision the researcher needs to adopt tools that are suitable for social behaviour or individualism.

Yes, there will be cases where surveys will be the right tools, there will be niches where neuro-techniques will add something (especially within ad testing), but there is a need for many more tools in the areas where behaviour is not determined by what is in individual minds.

3 thoughts on “Is Neuromarketing looking in the wrong place?”