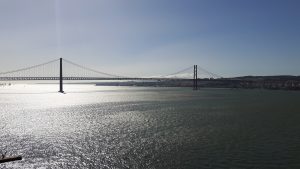 For a few years there have been relatively few new findings about mobile market research. We have seen the share of online surveys completed via mobile increasing and we have seen the number of mobile only studies (studies that require a smartphone, for example location-based, in-the-moment and smartphone ethnography) increasing. But the overall picture has remained fairly constant in terms of advice and practice. However, the picture has now changed.

There were more than 20 presentations particularly relevant to mobile market research – making it one of the largest collections of reports and findings from experiments reported anywhere.

In this post I set out my key takeaways from the ESRA Conference in terms of mobile market research. But, I may update this post when I get access to all of the presentations and papers from the conference.

For many years, the prevailing wisdom has been that grids on smartphones are a much bigger problem than they are on PCs. However, several studies presented at this conference, especially the study presented by Mick Couper, showed that this does not have to be the case.

What is a mobile optimised grid?

In many ways a mobile optimised grid is the result of adopting a mobile first approach (something that Sue York spoke about at the conference). A mobile optimised grid can mean looking like a traditional grid, if the labels are short, the number of scale points is few, and if the software is responsive (meaning it fits nicely on the page).

The papers showed that survey results were very similar when using mobile optimised grid, when making the following comparisons:

Note, when item-by-item approaches were used with a new page per question (as often happens in commercial studies) the data were similar, but the surveys took longer to complete.

Long labels are a problem 1

A point highlighted by Don Dillman was that if long labels are used for the rows it is hard to produce a grid that is mobile optimised. For example, if we have a question asking how important the following are in selecting a holiday destination

On a smartphone these long labels mean that there is not enough space to make several rows visible AND make the scale points visible AND ensure that the buttons or sliders are easy to use. If the labels are long, the mobile version needs to be achieved using an item-by-item approach.

Long labels are a problem 2

Several studies showed that long labels (and long instructions and long questions) tend to be poorly understood by many research participants. This was true of all self-completion modes; web, mobile and paper. Several speakers stressed the need for cognitive interviews to be conducted when designing new questions and questionnaires – to assess what the participant thinks they are being asked and how they set about answering the question.

Turning smartphones horizontal is not a great option

In the past, many researchers have felt that the best option is to ask research participants to use their phone in landscape mode, especially for things like scales and grids. However, several studies showed that (even when asked) only a few people do this. The people who did hold their phones in landscape mode tended to be younger and were perhaps familiar with using their phones to play games.

Facilitating mobile devices does change the results, because it increases the range of people taking the survey. This has been known for many years and nothing has happened to change this picture.

There are many groups of people who are less likely to complete a survey on a PC and if participants have the choice to use PC or mobile the coverage of the study improves. When the coverage improves the answers can change because some people are no longer being missed.

Are there mode effects when using a mix of Mobile and PC?

If your survey is badly designed for mobile, there will be mode effects. There is mixed evidence about open-ended responses on mobiles, with many people reporting that the open-ends are more limited from mobiles. There still seems to be agreement that multi-select grids when asked item-by-item on a mobile produce more answers that the multi-select grid asked on a PC as a conventional grid.

So, does that mean grids are ok? If well designed?

Not really. We can make grids on smartphones as good as grids on PCs. But on PCs and smartphones grids remain one of the items most disliked by participants. They are associated with more break offs, and, in interviews with research participants, they are regularly cited as reasons for not doing studies. Research still has a need to minimise the use of grids, to make grids smaller, and to make them easier.

Several people, for example Sue York, talked about the need to be more mobile first and to move away from long scales to simpler options, such as selecting rather than rating. Great evidence for this point of view was provided by GfK’s Randall Thomas & Frances Barlas. They showed that with fewer scale points the scales were easier to read on a smartphone, the information was very similar, and the differentiations (e.g. standard deviation) was greater.

Thomas and Barlas seemed to be recommending 3-point scales (e.g. Not Like, Neutral, and Like) – but they also offered support for 2-point scales.

Thomas and Barlas showed that in their studies, anchored scales produced results that were more consistent (between PC and mobile) than scales that were only anchored at the end points.

Are researchers training people to use PCs?

Several studies, for example data from SurveyMonkey, showed that when contacting people who were not part of research panels, almost 50% tend to use a mobile device. However, studies with panels (commercial research panels and the probability research panels favoured by social researchers) the proportion using mobiles is closer to 20% to 30%. Perhaps, the poor performance of mobiles in the past has discouraged mobile preferrers from being involved with these panels? If so, this is another reason that we need to adopt a more Mobile First approach.

Commercial researchers are doing a bad job at being Mobile First

Sue York presented data supplied by Research Now that showed that the proportion of Mobile Optimised surveys has not really improved over the last 3 years. The table from Sue York’s presentation is shown below. 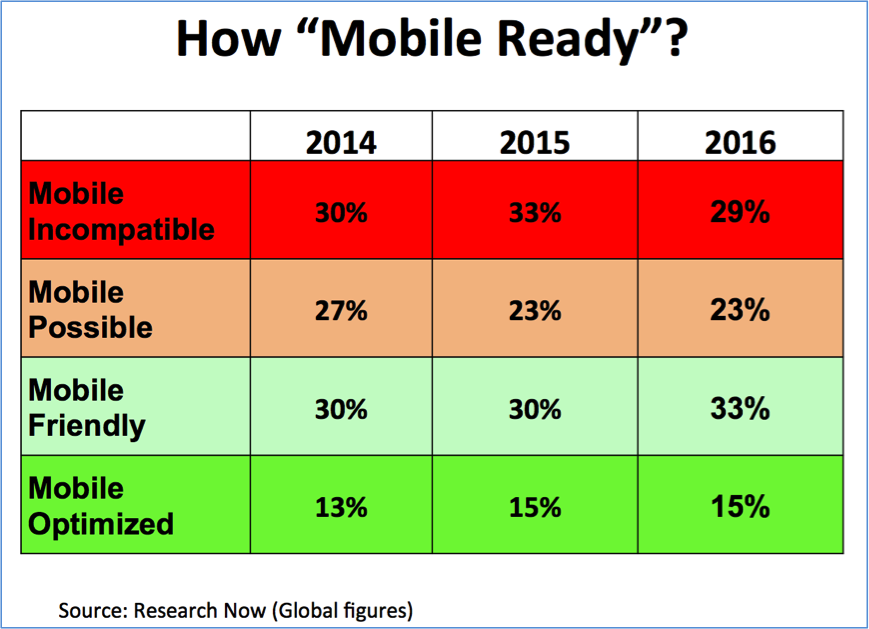 Despite the best efforts of panel companies, nearly one-third of the surveys being submitted to Research Now are judged to be ‘Mobile Impossible’, nearly a quarter ‘Mobile Possible’ – with fewer than half being mobile ‘Friendly’ or ‘Optimized’.

If it doesn’t work on mobile, don’t do it

Some people have argued that specific types of questions only work on PC (for example large grids, or some types of interactive questions). However, in most cases, excluding people who will only take part via mobile is going to compromise your research – and this effect is likely to increase. If you have something that is PC only, try to re-design it (or re-envision it) so that it does work on a smartphone, or reconcile yourself to using an increasingly skewed sample.

Sensors still not ready for the major league

There were some interesting papers in the use of sensors, for example using apps to collect media usage, audio capture to record broadcasts heard, and GPS to aid travel diaries. But none of them were without their challenges. The media capture approaches requires apps to be downloaded and significant  ‘per participant’ incentives to take part.

The GPS tracking for travel diaries was perhaps the most illustrative of the benefits and challenges. A pilot study presented at the conference showed that the data collected could be quite useful, much richer than the paper diaries and more accurate in terms of things like distance travelled. However, the app under-recorded the number of journeys. One of the reasons for under-recording was that the app turned itself off when the battery indicator reached 20% remaining – which happened often enough to change the data.

The key lessons from the various uses of sensors are:

Market research is based on informed consent. A paper by Barbara Felderer and Annelies Blom highlighted some of the challenges with privacy and consent. In a study in Germany they asked people to type in their current location (with options such as address, post code etc). Well over 90% of participants did this. However, the survey also asked permission to collect the location of the phone automatically using GPS. About one third of people who typed in their address said no to their GPS location being collected. This suggests we should not simply be collecting GPS without consent, and that consent will not necessarily be given when we ask for it.

No new references to Non-Smartphone phones.

There are over 7 billion mobile phones in use around the world. Fewer than 3 billion of these phones are smartphones, so by focusing on smartphones we are excluding the majority of the world’s population. However, the rate of smartphone adoption means that soon this will be less of a problem, and is already a marginal problem in many countries.

The top takeaways are: