This question of whether a link on a website should, when clicked, open a new browser window/tab or simply use the currently open window has been heavily debated elsewhere, but not so much within the insights world.
Until relatively recently, the general advice was to open external links in a new browser window or tab, for example by using the target=”_blank” instruction the HTML. However, more recently a well-informed, vocal, and at times vitriolic group of the digerati have been pushing for a change, suggesting that external links should show their content in the current browser window.

The case for opening in a new window
The arguments for using a new window tend to be more pragmatic than rooted in deep principle. Key reasons include:

What do the leading blogs do?
Given that the debate on this topic seems to be fairly one-sided, with most of the sites I have checked recommending NOT opening in a new window, we might expect that most of the leading blogs would follow this advice. However, this is not the case, only two of the top ten blogs open in the same window.

Using Technorati’s list of the top ten blogs, I visited each blog and clicked on the first external link I could find, and categorised the site as being New Window or Same Window. This produced the table below: 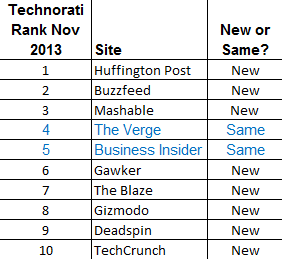 Some data about users
In order to move from conjecture to a more informed view I secured the assistance of Vision Critical’s Springboard team to add two questions to their UK Omnibus (Great Britain, online, N=2005, November 11, 2013).

Here is what we found:

New Window or Same Window?
The question was “Qn. Thinking about when you are browsing a website, for example the BBC. Sometimes they have links to articles on other sites, for example on the Daily Mail. Which of these two do you prefer the browser to do when you click on a link?”

Knowledge about opening in a new window
The question for this query was “Qn+1. When you are browsing a website and you click on a link to another website, do you know how to make your browser open the new website in a new window, as opposed to re-directing the current window?”

Only 50% of respondents, all members of an online panel, say they know how to force a link to open in a different window. In contrast, 17% said No, 26% were not sure, and 7% said they did not have an idea about what the question was asking.

Amongst the under 34 year olds, the number who said they know how to do this is 62%, just under two-thirds. Amongst those aged 55 or more, only 38% said they knew how to open the link in a new window. There is also a gender difference, more men say they know how to open in a new window (57%), compared with females (44%) – however, since this is self-reported, we can’t be sure if men are over-claiming in relation to females.

Links to the same site?
Most people seem to agree that links to other pages from the same site should open in the same window. If links within a site opened in new windows, the user could quickly end up with a very large number of windows or tabs.

Your views?
As always, I’d love to hear your views. However, one request, if you are commenting, it would be great to know if you are from the insights/market research industry, or from some other field – but this is not compulsory.

One thought on “Should links open new windows?”