Abstract: Ray Poynter reviews Malcolm Gladwell’s new book Talking to Strangers. Ray’s recommendation is to read the book (or listen to it on Audible), but not to accept everything you hear as science or fact. 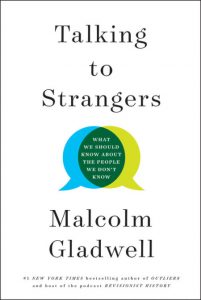 I’ve just finished listening to the Audible version of Malcolm Gladwell’s new book Talking to Strangers. I’d love to hear what other people think of the book?

I like what Gladwell and his publisher have done with the Audible format. Rather than read the written text it’s full of actual news recordings, recordings of police interviews, and of actors playing the parts when dealing with things like court records (if a recording of the actual event is not available). This uses the audio format is far better than just reading the text. It offers something the text does not offer.

My top takes from the book are:

I definitely recommend this book, it is well crafted and the Audible version is very easy to listen to (except for some of the detailed bits about crimes and torture).  The book does not provide any answers (IMHO), but it provides lots of great questions.

This assumption about the power of humans reminds me of a great webinar presentation that Janneke van den Bent from SKIM did for #NewMR last September. Janneke reported on a project where SKIM used two teams, one pure human, one AI assisted. One of the key findings was that the end client preferred the AI+Human report to the Human only report, it was clearer and easier to digest. Perhaps this is a market research-related example of what Gladwell is talking about, our tendency to over (and incorrectly) interpret. To watch a recording of Janneke’s presentation, click here.