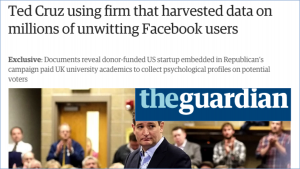 The Guardian website has a long article that looks at how Ted Cruz has utilised a UK company, and work done by UK academics, to harvest data from tens of millions of Facebook users without their knowledge. Ted Cruz is using this information to support his US Presidential campaign, but for market researchers the key aspects of the story relate to how the data was gathered, its massive potential for insight, but mostly for its ability to create massive damage to the reputation and standing of research – and the threat to privacy.

The key phrase here is that the people whose data is being harvested and used for various purposes, including the promotion of the Presidential campaign of a right-wing Republican candidate, are unaware that this is happening. The British company behind the project, and the Cambridge academics whose ideas created it, seem to feel they have permission because this is within the Facebook terms and conditions. It will be interesting to see if the UK Information Commissioner takes the same view.

Click here to read the full article – be afraid – be very afraid. Note, the point of this story for me is not that an unpleasant right-wing politician is using this, I would be just as concerned if a pleasant left-wing were using it, indeed I suspect they are.