Yesterday (17 January 2015) I was lucky enough to attend the Turner exhibition at Tate Britain in London and it set my mind thinking about the lessons for market researchers, in particular lessons for the way insight is communicated.

The paintings that Turner is most famous for, such as the Fighting Temeraire shown in the link, conveys the power of the moment, a great ship from the battle Trafalgar being towed to the breaking yards by an everyday steam tug as the sun sets in a fiery blaze, reflecting the passing of the age of sail to the age of steam.

Market researchers need to connect with audiences at the emotional level; without that connection the ‘facts’ tend to be ineffective. Humans are not computers, we are humans, as Damasio said “we are not thinking machines that feel; rather, we are feeling machines that think”. If the presentation does not change the way the audience feel, it won’t change the way the audience acts.

The lesson for researchers is that we may need to include detail, but it should not be the central feature. People who want to inspect the detail (and at the exhibition there were those who used a magnifying glass and held their faces a few inches from the canvass) can find the detail. But, those interested in the main message are not distracted by detail. In a market research context this typically means relegating the detail to an appendix or annex.

The detail belongs in the preparation

The Turner exhibition showed not just the paintings but also the charcoal and watercolour sketches that Turner had created. The charcoal sketches, conducted in the field by Turner, were incredibly detailed and precise. The watercolour sketches were less precise, but captured the emotional context of the setting. The final paintings, especially the oil paintings, were focused on the impact Turner wanted to create.

For market researchers the data analysis is, initially, all about the detail – just like the charcoal sketches. Researchers also need to find and capture the emotions in the data – just like the watercolour sketches. But the sketches are not what Turner displayed or sold to patrons, what he displayed was the final painting. Similarly, market researchers should not focus on displaying the analysis or the process, they need to focus on the impact they are aiming to create.

One of the weaknesses of many market research presentations is that they are a one-off affair. This means that the researcher is presenting materials, using stories, and drawing analogies that have not been tried and tested before. Most material is improved by being used on multiple occasions and by being tweaked – for example, in the way a stand-up comedian will try out new material in the clubs before launching it on a major stage.

Looking at Turner’s work it is clear that there were ideas that he used over and over, to help him achieve the impact he was looking for. Two examples are the way he tackled fires (as in The Burning House of Lords and Commons) and his use of a column of light to highlight something, as in Peace, Burial at Sea.

Researchers need to find devices that help to explain their research, their methods, and most importantly to convey the emotional message required to create impact. 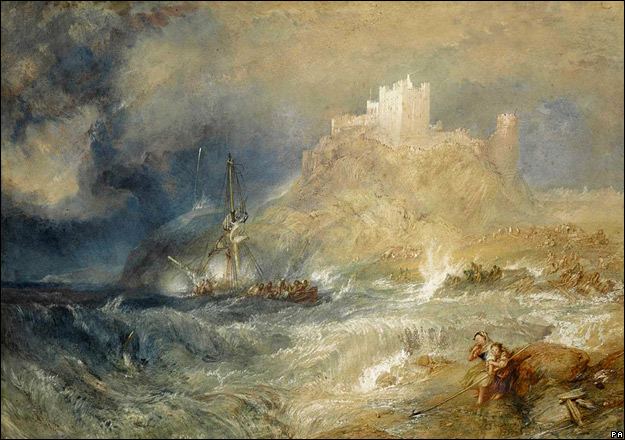 The present is part of a continuum

Sometimes, market research is presented as if it sits alone in a moment in time, as opposed to sitting at the intersection of the past and the future. Turner’s watercolour painting of Bamburgh Castle is a great example of Turner’s continuum. He sketched the castle as a young man, but the painting (shown in the link) was painted 40 years later. Another approach that Turner used was to paint two paintings expressing different moments in time, such as the two views of Italy mentioned above in connection with The Pifferari.

Research stories are usually more impactful if they too sit in a continuum. For example, if you test a new concept the message can be much more powerful if you share with the audience that this result is very similar to X and Y (especially if the audience are familiar with X and Y), or perhaps that this result is interesting because it is exactly the opposite of what you have found in the past.

But perhaps the most important thing for market researchers to remember is that they are creating the story, they are not discovering it. A photograph (within certain parameters) is based on discovering something that exists; a painting is about creating something which is designed to create a specific impact.

I would be very interested to hear your thoughts. I must hold my hand up and say that I am certainly no art expert, so I may well be creating hostages to fortune here. Do my lessons from Turner resonate with you? Can you think of other examples?

2 thoughts on “What can the painter Turner teach market researchers?”