[Sorry, this is a really long post, but I have been asked several times to explain the key differences between qual and quant. Here is my attempt to do that, but I would really appreciate comments from others.] 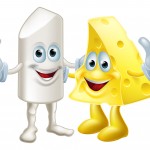 Qual and Quant, like Chalk and Cheese in this image, different – but they can get along with each other.

For many people a very simple, probably over-simplified, definition of qual and quant research is all they are ever going to need, so it is worth setting that out first – but remember this is not the full picture.

Qual: a qual researcher typically uses unstructured information (such as the discussions in a focus group) to gain an understanding of why people do or believe something. Qual does not provide numbers that can be extrapolated to a wider world. Qual can say things like nearly everybody will be able to understand this advert, but it can’t say things like 22% of customers who see this advert will buy the product.

Quant research assigns numbers to phenomena and is based on the assumptions that things exist and that quant research can discover them. For example NPS is based on an assumption that there is a link between Likely to Recommend scores and behaviour and that the link can be discovered. The quant researcher’s view of the world is like a treasure hunter finding a hidden chest of money and assigning the value to the contents by counting the value of the money.

It is worth noting that all quant research starts as being a qualitative process. For example, if you decide to measure (count) how many children are playing in the street you have to make decisions, qualitative decisions, about things like: how old can somebody be and still be a child, what is the boundary of the street, and what do we mean by playing. Creating rules for these sorts of questions is called operationalizing and this process facilitates methods based on measurements.

Quantitative research tends to conduct its analysis across people rather than within people. For example, if we are trying to assess the impact of height on various behaviours we sample people with different heights and measure them on the various criteria. Results that vary by height are deemed to be discoveries – for example we might find that taller people are more likely to play some sports than others.

Quantitative research employs algorithms to produce the outputs; where the algorithms can range from very simple to very complex. For example, the algorithm to find out how many customers are male and how many female is the simple process of adding up the number who are male and those who are female; often converting these numbers to percentages. A complex algorithm might collect GPS location data from 1000s of customers to detect which travel patterns were most predictive of higher purchase levels.

Qualitative research is all about meaning and seeks to provide understanding rather than enumeration. Qual research can be based on any form of input. Although the discussions in focus groups and depth interviews are common forms of data for qual research, so are pictures, videos, diaries, direct observation, and social media.

In qualitative research the researcher is an active part of the research process. Qualitative researchers seek to use their subjectivity to better understand why people believe the things they believe and do the things they do. The qual researcher is trying to actively use their experience of life to understand the phenomena they are researching. Consequently, it is possible for two qual researchers to arrive at quite different conclusions if they start with different prior life experiences and assumptions. By contrast, quant researchers typically try to minimise, rather than utilise, their subjectivity.

Qual research focuses its analysis on individuals and on the interactions between individuals. A qual researcher will try to understand a process, for example choice of a new mobile phone, by understanding each person being researched. By contrast quant research will typically take data for lots of people and seek to explain averages or groups of people.

The definitions of qual research are a bit more varied than those for quant and there are some practitioners who belief set is similar to quant researchers in that they see their role as trying discover naturally occurring phenomena and describe it. These researchers are in some ways like the Victorian botanists, seeking to describe as accurately as possible the plants they find.

However, more generally, qual research is based on a philosophy that when humans research humans there is no such thing as objective truth. The view of the world that is often associated with qualitative research is ‘constructionist’, because the research does not discover a story, it creates a story. In terms of market research the objective to create a story, after reviewing the evidence, that is useful to the client, i.e. it helps them make better business decisions. Note, just because no one story is the single most correct story does not mean that every story is equally useful.

The validity of quantitative research often rests upon the methods employed (e.g. sampling, sample size, and algorithm). In qualitative research two additional essential factors are the ability of the researcher and the coherence of the findings/story.

The growing similarities in how qual and quant information are collected

Changes in technology, such as the use of mobile devices, the collection of images and video, have resulted in some of the traditional differences in how qual and quant are conducted being eroded. However, these differences in the sort of data collected have not impacted the nature of the difference between qual and quant.

For example, consider the difference in how social media comments are processed. The data is unstructured and traditionally that sort of text material was considered qual, resulting in some people concluding that when they ran their text analytics they were conducting qual at scale – or quant. But when we look closely at what is happening it is simply another example of operationalizing a process to convert it from Qual (being based on the human insight gathered by reviewing information) to Quant. Typical processes for this sort of quant analysis are employing coders to turn the text into numerical codes/scores and using sentiment analysis to code the text into positive, negative and neutral.

The key differences between qual and quant

Quant research is based on measurements, an assumption that phenomena can be discovered, and predictions made by using the differences between people.

Qual research is based on understanding what is happening within cases and using that understanding to make generalizable findings. The researcher is creating (not discovering) an explanation. The focus of the research is more about producing useful insight, rather than a ‘correct’ representation.

Do the differences matter?

Quite often when the topic of methodology crops up somebody will say that ‘clients don’t care about methodology’ – implying that the topic is not important for discussion. Whilst it is clearly the case that many clients are not particularly interested in methodology, it is important for somebody to be interested. This is because clients are interested in the end result, the impact on the business, and the results are impacted by the method. This is like the difference to the taxi customer about the type of fuel used. The customer is not, generally, interested in the type of fuel, but we want the driver to be aware of the difference so that they fill it with the right type of fuel and we want whoever is in charge of servicing the car to use the right schedule and the right tools.

In terms of the difference between qual and quant the key issue is that the researcher knows the power and limitation of the technique they are using and should be aware of the benefits and drawbacks of the main alternatives. In my experience it is not uncommon for quant researchers to offer quant research in ignorance of the epistemological problems of quant and being equally unaware of the benefits of qual (and vice versa).

AI and the end of Quant Research?

Artificial Intelligence (AI) could spell the end of the dichotomy of qual and quant. One interesting AI development is the creation of software that can interpret material in an intuitive way. This opens the door to conducting qualitative data at scale with AI providing large-scale, intuitive, consistent research.

At that point we might we see an end to the need to have quant research. Quant research, as discussed above, needs to trade-off a large amount of sensitivity and the ability to deal with within case information in order to produce measurements. With large-scale AI, the current simplifications of quant research may be redundant. We might see a world where AI intelligently selects information, engages in discourses, and constructs experiments with the need to structured data and without any explicitly process of operationalizing.

However, although the advocates of AI often claim we are on the verge of creating machines that will interpret qualitative information in an intuitive way, my feeling is that we are still a few years away from this.

[So, what are your thoughts? How would you improve this post?]

8 thoughts on “What is the difference between Qualitative and Quantitative Research?”