Back in 2010 ,I caused a minor stir in the research world by predicting (at the MRS Conference in London) that surveys would have disappeared in 20 years (i.e. by 2030). This prediction was put into wider circulation when I clarified my prediction in a blog. The key point being that I was predicting the end of the commercial, long survey, and it being replaced with social media listening, online communities, new ways of researching, the use of open-ended questions, and the use of stored information to remove the need to keep asking questions.

In 2014 I updated my prediction and showed some numbers from the ESOMAR Global Market Research Report. 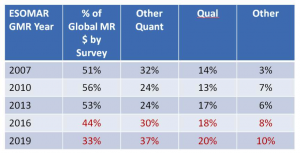 So, how did my predictions stand up? The table below shows the ESOMAR figures for 2016, below my estimates. Note, I have added a new column which combines Other Quant (e.g. traffic and audience data) with Other (e.g. big analytics). In the future I will focus on Surveys, Qual, and a single Other.

I think my predictions were pretty good (or pretty lucky). Yes, I got the split between the types of other wrong, but I got the net other, qual, and surveys within a couple of percentage points.

However, when I add the 2017 data to my table (which was published this week), the picture evolves further. The growth in Surveys seems to be driven in online and mobile research (some of which won’t be surveys, but I have to work with the data I have).

So, what is my forecast? I still think surveys (the long, commercial sort, will almost disappear), but it will take a bit longer. In the table below I have added my revised predictions. 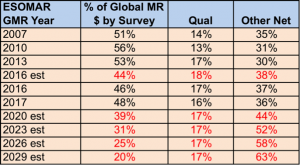 I think the reasons for change are the same as those I listed in 2010, social media listening, online communities, new ways of researching, the use of open-ended questions, and the use of stored information to remove the need to keep asking questions. Amongst those new ways will be chatbots, automated facial recognition, more behavioural options and AI inspired initiatives.

The main forces that will allow surveys to persist are: improvements by the panel companies, improvements in mobile friendly surveys, and innovative ways of sourcing new research participants.

Note, I do not expect DIY surveys to diminish, and I expect social research to become increasingly separated from commercial market research (and social research will keep its surveys much longer).

What are your thoughts?

One thought on “When will surveys disappear? (2017 update)”