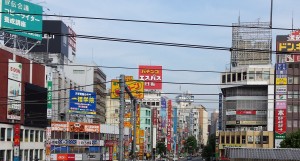 Back in March 2010, I caused quite a stir with a prediction, at the UK’s MRS Conference, when I said that in 20 years we would not be conducting market research surveys. I followed my conference contribution with a more nuanced description of my prediction on my blog.

At the time the fuss was mostly from people rejecting my prediction. More recently there have been people saying the MR industry is too fixated on surveys, and my predictions are thought by some to be too cautious. So, here is my updated view on why I think we won’t be conducting ‘surveys’ in 2034.

What did I say in 2010?
The first thing I did was clarify what I meant by market research surveys:

Why no more surveys?
In essence there are three key reasons that I think surveys will disappear

Because surveys are currently so important to market research there is a vast amount of work going on to improve them, so that they can continue to deliver value, even whilst their share of MR declines. The steps being taken to improve the efficiency and efficacy of surveys include:

How quickly will surveys disappear?
When assessing how quickly something will disappear we need to assess where it is now and how quickly it could change.

It is hard to know exactly how many surveys are being conducted, especially with the growth of DIY options. So, as a proxy I have taken ESOMAR’s figures on market research spend.

The table below shows the proportion of global, total market research spend that is allocated to: Quant via surveys, Quant via other routes (e.g. people meters, traffic, passive data etc), Qual, and Other (including secondary data, consultancy and some proportion of communities). 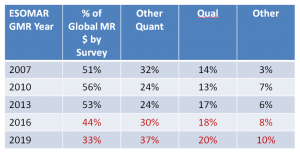 The first three rows show the data reported in the ESOMAR Global Market Research reports. Each year reflects the previous year’s data. The data show that surveys grew as a proportion of research from 2007 to 2010. This was despite a reduction in the cost of surveys as F2F and CATI moved to online. From 2010 to 2013 there was indeed a drop in the proportion of all research spend that was devoted to surveys. However, given the falling cost of surveys and the continued growth of DIY, it is likely that the absolute number of surveys may have grown from 2010 to 2013.

Other quant, which covers many of the things that we think will replace surveys, fell from 2007 to 2010. In many cases this was because passive collection techniques became much cheaper. For example the shift from expensive services to Google Analytics.

The numbers in red are my guess as to what will happen over the next few years. My guess best on 35 years in the industry, talking to the key players, and applying what I see around me.

I am also forecasting that they will fall another 11 percentage points by 2019 – trends often accelerate – but again, does anybody really think it will be faster? If that forecast is true, by 2019 about one-third of paid for research will still be using surveys. Other quant will be bigger than surveys, but will not be a single approach; there will be many forms of non-survey research.

I also think that Other (which will increasingly mean communities and integrated approaches) and qual will both grow.