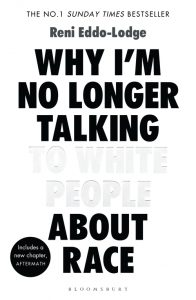 If you only read one book between now and the end of the year, this is the book I think you should read, especially if you want to gain some insight into how race affects lives in the UK. If you work in the field of insights (i.e. you seek to understand people, their interactions, and their lives) – you need to read this book (or listen to the Audible version, which is read by the author herself).

Spoiler alert! The author does in fact talk to white people, and she does talk to them about race. The title comes from her blog post in 2014, which had the same title and contained the following explanation “I’m no longer engaging with white people on the topic of race. Not all white people, just the vast majority who refuse to accept the legitimacy of structural racism and its symptoms. I can no longer engage with the gulf of an emotional disconnect that white people display when a person of colour articulates their experience. You can see their eyes shut down and harden. It’s like treacle is poured into their ears, blocking up their ear canals. It’s like they can no longer hear us.”

I don’t agree with everything Edo-Lodge writes in the book, but it was all worth hearing, and it made me challenge my initial responses and my perceptions (changing some of them). When you read it, read it with an open mind. If you disagree with a point she makes, think about why you think she is saying that, and think about why you are reacting in the way you are. In all likelihood, she is saying it because this is what she has experienced, and you may simply be looking at the same thing from a different starting point.

A good example of perspective is given by the discussion of ‘White Privilege’. The book has a really nice example of why ‘privilege’ is so hard to see if you are the beneficiary. Edo-Lodge talks about a time, when for money reasons, she commuted to work, partly by train and partly by bicycle. She discovered that most of the stations were really unfriendly (i.e. biased against) people with wheels. People with bikes, parents with buggies, and especially people in wheelchairs had to struggle, or had to use alternative doors, or could not use that station at all. Being able-bodied meant one had privilege, but it never seemed like privilege until she had to struggle carrying her bike upstairs and through awkward doors. Before she had the bike with her, the stations were suitable, so she didn’t notice the privilege she was receiving.

In terms of race, white privilege is the situation where the world is very rarely biased against white people. White privilege does not mean life will be easy, nor that you will be employed or rich, it simply means that the system is not biased against you because of your skin colour. In 2020 Britain (where I live), being a white, straight, middle-aged male means there are several, major, biases that are not being applied systematically to you. And, if you are (like me) a white, straight, middle-aged male you won’t notice any of those biases – because they are things that don’t happen to you, and things that don’t happen to you are hard to see.

I think this book is a must read for anybody who wants to understand race in the UK. I would hope that most people would want to understand how others see things. But the book has additional relevance to insight professionals. These include:

But, don’t take my word for it!

Remember, I am white, middle-aged (just about) male talking about a book written by a black woman who is the same age as my children. If you really want to know what she says, and what the implications are for you, then read the book (or listen to the audible version).

What Do White Researchers Need to Hear?

A couple of weeks ago NewMR hosted two webinar discussions about what black researchers need to hear. The sessions were moderated by US researcher Shannon Danzy, and featured Wale Omiyale, Charlene Adamah & Kim Smouter from Europe, and Whitney Dunlap-Fowler, Carol Watson & Khary Campbell. You can listen to the recordings of both discussions here.

One thought on “Why I’m No Longer Talking to White People About Race, by Reni Edo-Lodge”