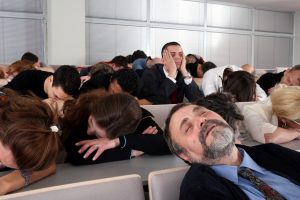 Every so often there is an upsurge in criticism about the use of bullets in presentations, often linked to criticism of PowerPoint. I agree that any presentation that is not engaging, understandable, and memorable is likely to be a failure. But I do not think that means bullets do not have their place.

Lets’ consider a famous and influential bullet list, at least for people who live in a culture or group for whom the Bible as a reference. The Ten Commandments are an example of a bullet list. Do you think these points would have lasted millennia if they were buried in the text, or depicted as an infographic?

Another place where many of us see a bulleted list, indeed a list with sub-lists, is when we read a menu. The major list might be Starter, Main, and Dessert – with each of these three broken into several options. For example, the options for the Main Course bullet list might be Steak OR Cod OR Macaroni Cheese.

Why do we use bullet lists?

Although bullet lists are frequently criticized, they remain in very common usage. That is because, when used correctly, they fulfill a specific set of benefits. These benefits include:

A.      Belonging together. A bullet list says to the audience that these things belong together AND they are distinct items.

B.      An unordered list. Unless we indicate otherwise, a bullet list does not mean that the first item is the most important, or that the last item is key. Indeed the sequencing of items in the list should aid the story telling.

C.       Completeness. Unless we indicate otherwise, the implication of a bullet list is that it is (in some meaningful/relevant sense) complete.

D.      A summary. The bullet list is a summary. It tells the reader in a short form that this is the key information about this group of items. It also sends a message that this is not all of the information, but just a summary.

The implications for business communication?

So, leaving the bible and menu behind, what does this imply for business presentations? When I use a bullet list, I am saying:

Three Types of Bullets NOT to Use!

Some common uses of bullets are a problem and these should be abolished. Here are my top three recommendations for abolishing bad bullets.

One thought on “Why Use Bullets in a Presentation? The difference between good bullets and bad bullets.”