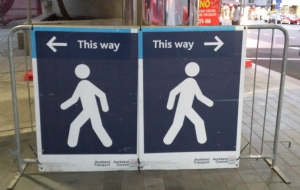 Most weeks there is something in the MR media about a new force for disruption, which is often followed by somebody else saying ‘that is not disruption, it is X’, where X tends to be one of ‘Hype’, ‘Same old, same old’, ‘Just the continuation of a trend’ or similar. In a recent GreenBook post Jeff Resnick wrote about ZappiStore and its potential for disruption, and this elicited at least one comment from somebody who wanted the word ‘disruption’ to be removed from the list of words used by MR bloggers.

However, I think the attacks on the term disruption in MR blogging probably miss two key points:

When we are talking about disruption that has not happened yet, there has to be a probabilistic element. If the commentary waited until disruption had happened, it would hardly be very interesting. However, this means that not every disruption written about will happen, but that does not invalidate the process of looking at changes and considering them. The process of writing about potential disruptions allows them to be considered more widely and for people to decide whether they want to factor the possibility of them happening into their plans.

If we look backwards over the recent history of MR, then I think we can see plenty of examples of disruption. For example, I would say the shift to online was certainly disruptive in the sense of hundreds of thousands of jobs being lost globally and a shift from representative samples of people who did perhaps one survey a year to panel members completing 100 plus surveys a year. DIY MR has increased to the point where more surveys are conducted by non-researchers than researchers – something I would describe as disruptive, even though it may not seem so disruptive to those conducting their surveys inside the MR enclave.

In terms of Jeff’s article on ZappiStore, what I think is potentially disruptive about their model lies in the second part of their name, i.e. ‘Store’. ZappiStore are not a conventional provider of research solutions, they are a shop. People with a business problem go along and buy a solution that has been produced by one of a range of companies, for example by Millward Brown, BrainJuicer, MMR or Added Value. These products have three things in common (when purchased from the store), they are relatively cheap (e.g. a Link test for $3000), they are fast (hours not days), and they do not require market research skills in order to configure them (because they are preconfigured). Note, using these products does require business skills, it does require the user to be familiar with receiving market research outputs, but it does not require the user to be able to create market research – which makes it quite different from DIY tools that allow a user to program a survey or create an online discussion or focus group.

I am writing a paper on automation at the moment (more on this soon) and yesterday I was interviewing a major research buyer who was talking about when he uses this sort of service and when he uses the full-service route – going directly to the agency. For him the lower price of automation is a nice to have, but the speed is the thing that is making the difference. His colleagues are including him (the internal insight expert) in discussions because he can provide results in hours, which fits their speed of decision-making.

My feeling is that automation is going to dramatically reduce the headcount in MR over the next 5 years and automation is going to give benefits to the winners and will really hurt those who do not get it right (which will lead to closures/acquisitions etc). That will be pretty disruptive in my option. Automation may also increase the use of market research, because it is faster, cheaper and less flexible (why ‘less flexible’ is often good is another post). That change, if it happens, will also be disruptive.

What do I mean by disruptive? Probably any or all of the following: 1) lots of people lose their jobs or have to work harder for less money; 2) new companies appear on the scene and become established (which often means jobs and power shifts from the old order to the new order), 3) new uses or customers appear (so when Millward and Brown invented Ad Tracking in the 1980s, that was pretty disruptive – and saw a growth in employment in MR).

Note, ZappiStore are a sponsor of NewMR and GreenBook is a media and business partner of NewMR.

10 thoughts on “In Market Research, what do we mean by ‘Disruption’?”