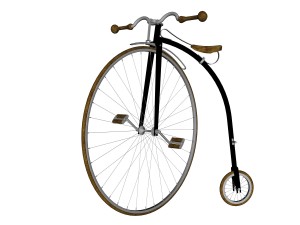 ‘What is an insight?’ and ‘What’s the difference between a finding and an insight?’ are two questions I am often asked. Typical definitions of insight in the context of marketing and market research tend to include concepts like:

However, it may make it clearer if I share an example of something I think is an insight, all about Victorian bicycles.

Why did a penny-farthing bicycle have such a big wheel?
Penny-farthing bicycles (or high wheelers), like the one in the image, were very fashionable in countries such as UK and USA from the mid-1870s, for just under 20 years. These bicycles were hard to mount, tricky to ride, and resulted in many injuries (the term ‘header’ was used for people who fell forward off the bike).

With all of these limitations, why did this this type of bicycle become so popular, why did it disappear so quickly, and what can this teach us today?

The data
Disclaimer: you can jump to the insight, i.e. the next heading, if you want to. This post is set out to follow, and thereby illustrate, the flow from data to insight. In most cases insight is based on data, but once the insight has been found, not everybody needs or wants the data. 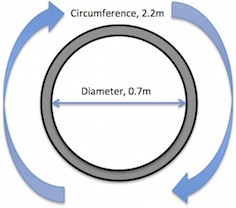 The circumference of the wheel is also the distance it will travel along the road if it makes one full rotation.
If somebody can turn the pedals 100 times in a minute they will travel about 220 metres (about 240 yards), which is just over 13 kph (kilometres per hour), which is about 8.2 mph (miles per hour)

The insight
If somebody wants to travel faster there are two key variables. They can pedal faster or they can have a bigger wheel. Even for sporty people, about 100 turns a minute is the limit to how fast they can turn the pedals.

A typical bicycle might have a wheel of 0.7 m, but the penny-farthing often had a front wheel of 1.5 metres (about 1.6 yards). Applying the same maths as above:

The insight and its consequences
Bike manufactures, such as Eugene Meyer of France, had the insight that making the front wheel bigger would increase the top speed. Later James Starley, UK, added a mounting step to facilitate using a bicycle with such a large front wheel. This led to an arms race in the size of wheels (or perhaps a ‘leg race’, since the limitation is the distance from the seat to the pedals). Wheels grew larger and speeds grew.

In 1876 Frank Dodds of UK set a record of 25.4 km for a one hour ride. In 1891 Frederick Osmond also of the UK set the highest record to date of 38 km for a one hour ride. Osmond would have needed to pedal at 133 rpm, quite a feat, assuming his front wheel was 1.5 metres. Today, professional time trial riders have a cadence of about 110 to 120 rpm.

The end of the penny-farthing
Now we have the insight into why the penny-farthing had such a big wheel, we can understand why its popularity ended very quickly. In the 1880s people started experimenting with a link-chain connecting the pedals to the drive wheel. This meant that the tyranny of one turn of the pedal to one turn of the wheel was ended. For example, the cogs on the bike could be set so that one turn of the pedals turned the wheel twice, or three times. Eventually, gears were added, which is simply a method of giving the rider a set of choices about the ratio of pedal turns to wheel turns.

In 1885 the Rover Safety Bicycle was launched, and the term safety referred to a large extent to having a normal sized front wheel. Within eight years the production of high wheelers had ended and bikes were utilising chains with links and cogs.

The implications for insight today?
The first insight is that we should not be too quick to ascribe something as simply a fashion. Penny-farthings were certainly a fashion, but their shape was driven by desire for speed, and an innovation that delivered it.

The second insight is the importance of correctly defining the attributes that are driving purchase. The penny-farthing was a very high bike, this improved the ability to see the surrounding world, but the attribute height was largely irrelevant. The motivation was speed, and this was delivered by the large wheel – the height was simply a consequence, not a reason.

Third, a product can succeed if it meets an unmet need, in the way the large wheel met the need for more speed. Too often our attention is drawn to case studies where the best product did not win (as in VHS triumphing over Betamax), but generally the product that meets the needs best is the winner.

Finally, an innovative product can quickly be replaced if something else meets the need in a better way. The link chain and cog was a better solution to the need for speed, and it quickly replaced the penny-farthing. Music provides a great example of this replacement process. Cassette tapes freed people from the tyranny of needing a record player, but tapes were quickly succeeded by CDs, and then MP3 players, and now sound is mostly accessed from the cloud – all meeting the desire to have my music with me when I am on the move.

BTW
Penny-farthing bicycles did have one other important benefit. The large wheel was better suited to cobbled roads than a smaller wheel, because it spanned across the lumps and hollows. The introduction of inflated tyres on bicycle tyres in 1888 removed the final edge the high-wheeler had, contributing to the rapid demise of the big front wheel.

Watch the bikes in action
This YouTube Video of a modern penny-farthing race from Australia manages to convey the speed and the danger of the high wheeler.